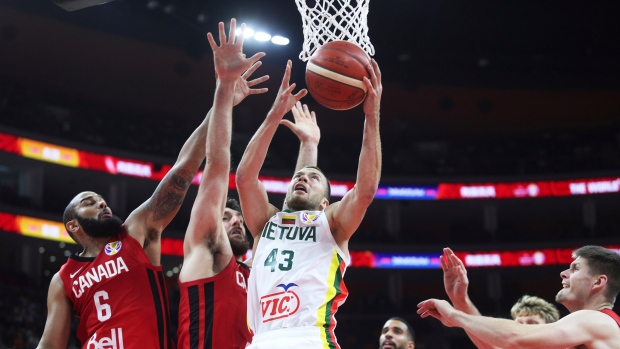 DONGGUAN, China — Missing almost all of its NBA talent, and drawn into arguably the World Cup's toughest group, Canada's World Cup story was seemingly written before the team had even touched down in China.

Still, the Canadians clutched slim hopes of an improbable upset.

That hope died with a 92-69 loss to Lithuania on Tuesday and, moments after the loss, coach Nick Nurse talked about switching gears.

Because, while the loss sends Canada to the classification side of the draw, snuffing out the slim hope of clinching one of the seven Olympic berths up for grabs at the World Cup, the work isn't done.

"Obviously when you come in here, we had our sights and goals and dreams on advancing out of this pool," said the coach. "We knew it was going to be hard . . . and now you've got to continue to play, and for us, it's like this is a good hard-working group of guys with a lot of pride, that's why they're here, we've got to represent ourselves.

"We feel a little down about the result tonight that we couldn't battle a little harder and make it a little bit closer. But we've gotta get ready to play against a talented Senegal team that played Australia tough today, and then we go from there and see what awaits us from there."

Kyle Wiltjer had 24 points, while Cory Joseph had 15, but the seventh-ranked Lithuanians — who'd routed Senegal by 54 points two nights earlier — were too much for the undermanned Canadians, who are missing all but two of their NBA players in Joseph and Khem Birch. The latter player had 12 points on the night.

The game was a must-win for the Canadians, after they lost their opening Group H game 108-92 to Australia on Sunday.

Canada caps the preliminary round Thursday against Senegal, who are also 0-2, before travelling to Shanghai for two important classification games. On the line are 16 berths for one of the four second-chance Olympic qualifying tournaments next June. The four winners of those tournaments punch their tickets to Tokyo.

How does Canada regroup after two losses?

"I don't know," said a fuming Joseph. "Just play. They're all important."

Joseph's anger was mostly aimed at the referees, who, much like Sunday's game, were quick with the whistles in the early going. Nurse was a picture of frustration, pacing the sideline, pleading with officials, and shaking his head in disbelief.

"At the end of the day we lost the game. We didn't do enough to win."

Canada's World Cup story could have been far different. This summer promised to be a coming-out party for the country's national program, the year that finally saw a team stocked with NBA players. Canada Basketball listed 17 NBA players on its camp invitation list, but ended up with just Birch and Joseph. Kelly Olynyk was injured in exhibition action.

Everyone else? They passed on national team duty, leaving a team comprised of mostly European-based players — including five Canadian university products — the mammoth task of trying to qualify for Tokyo. Even if Canada does clinch a second-chance qualifying spot, who'll show up to play?

"Obviously not the outcome our team wanted, so we have to learn from it, this isn't the end of the tournament," Wiltjer said. "So we've just got to continue to be positive as a program and just continue to work."

The Canadians are making their first World Cup appearance since the 2010 tournament in Turkey, where they went 0-5 and finished 22nd out of 24 teams. Canada's last World Cup win came 17 years ago when they beat Venezuela to finish 13th in Indianapolis.

"At the beginning you always expect to win, but now we have to take the mindset that we are kind of moving on and we got a couple more games to win and finish the best we can," said Canada guard Phil Scrubb. "(The loss) will be tough for today but tomorrow is another day and we will forget about it and move on."

Lithuania also has just two NBAers in Valanciunas and Domantas Sabonis, but the players' level of commitment to their national program is unmatched. Valanciunas, who called basketball Lithuania's "second religion," is playing his 13th straight summer with the national team.

The overmatched Canadians certainly couldn't be faulted for their effort at Dongguan Basketball Center. They were scrappy on the defensive end, but had trouble generating offence against a significantly bigger Lithuanian side that outrebounded Canada 46-27.

Part of the Canadians' gameplan was to utilize their long-range shooters, but they hit just five of 14 shots from deep.

"We were coming in hoping to get up a lot of threes tonight, and kind of shoot over the top of them, but I give (the Lithuanians) credit, they were playing hard and hustling out to our shooters and about the only one they couldn't keep track of was this guy," Nurse said with a nod to Wiltjer, who was 3-for-3 from the three-point line.

Canada never led and trailed 24-14 to end the first quarter. Foul trouble sent Kevin Pangos to the bench just four minutes into the game, and Birch followed him a couple of minutes later with a pair of fouls.

The Lithuanians compiled a 16-point lead early in the second quarter, but Canada fought back to cut the deficit to nine points. Lithuania took a 46-36 lead into the halftime break.

Lithuania went ahead by 15 midway through a third quarter that saw Melvin Ejim on the bench in foul trouble, but Canada clawed back and a beautiful pass from Pangos to Brady Heslip for a three-pointer cut the difference to nine points. All momentum fizzled at that point though, and the Canadians trailed by 16 to start the fourth.

Australia also advanced from Group H after an 81-68 victory over Senegal in Tuesday's early game.