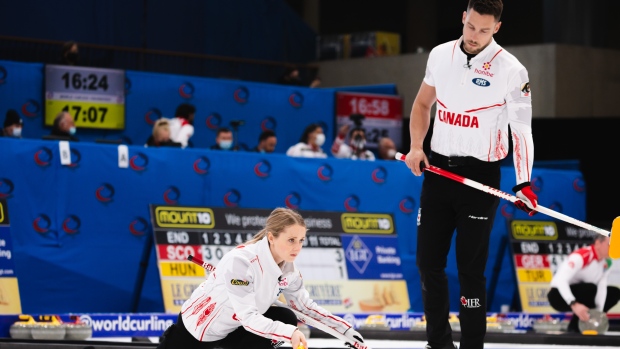 GENEVA — Canada’s Jocelyn Peterman and Brett Gallant fell to Scotland’s Eve Muirhead and Bobby Lammie 8-4 on Monday in a clash of two of the top teams at the world mixed doubles curling championship.

The win elevates Scotland to 4-0, tied with the United States atop Group B. Canada sits third with Hungary at 3-1. A Canadian deuce in the sixth end tied the game before Scotland scored four in the seventh for the win.

"We knew that was going to be a good game and we’d have to play well," said Peterman. "Even though it was a loss, I think we’re feeling pretty confident with how we’re throwing and how we played that game,"

Peterman and Gallant are back on the ice Tuesday with two games.

First, they take on Hungary’s Ildiko Szekeres and Gyorgy Nagy (3-1), followed by Julie Zelingrova and Vit Chabicovsky (2-2) of the Czech Republic.

The top three teams in both pools advance to the playoffs with the top two seeds receiving a bye to the semifinals, while the remaining four teams play in the first round. The gold- and bronze-medal games will be played on Saturday.

Muirhead played solid defence for Scotland in the first end when her closing shot doubled out a few Canadian stones and forced Peterman and Gallant to draw for one.

Canada returned the favour in the second, keeping Scotland to just one.

In the third, Scotland put Canada in a position where throwing its last would be too risky and decided to take one instead.

Scotland found its way to two points in the fourth end and then added to its lead in the fifth with a steal of one. Once again, Canada was put into a situation where it decided not to throw its last due to the risk.

Canada used its power play in the sixth end, and it looked like it could pay big dividends with a series of rocks scattered in the 12-foot. Scotland narrowed the scoring zone on its last shot of that end with a freeze, so Peterman and Gallant took two points with a draw to tie the game.

“It was pretty tight. In a few ends they seemed to have the angles in their favour a little more than us," said Gallant. "We just weren’t able to get the angles set up to give us a chance for more than singles."

Muirhead and Lammie took advantage of some Canadian half-shots in the seventh end for a big four score and ran Canada out of rocks in the eighth.

The four-ender was one of only a few opportunities for either team to take control of the game, with all four players shooting above 80 per cent. Muirhead was at 85 per cent and Lammie at 84, while Peterman curled 81 per cent and Gallant was at 80 per cent.

This report by The Canadian Press was first published April 25, 2022.