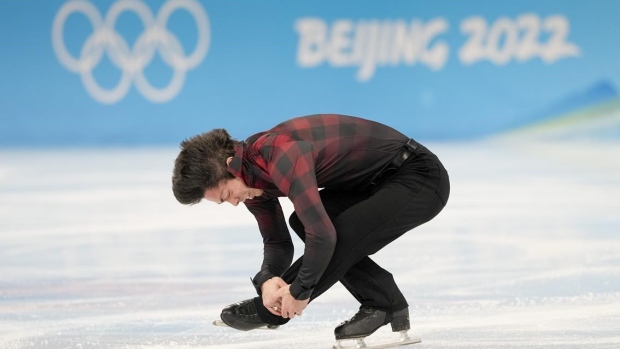 BEIJING — Three days after he touched down in Beijing, Keegan Messing's Olympics were over before they'd barely begun.

The 30-year-old figure skater, who arrived a week late to the Games after a positive COVID-19 test, finished 11th in men's singles on Thursday amid perhaps the finest Olympic field ever assembled.

His Olympic story wasn't what he'd hoped to write. He missed the team event entirely. And in his free program he downgraded one of his two quadruple jumps to a triple, a costly mistake in a field full of big jumpers that he wishes he could have back.

Still, competing in Beijing at all felt like a victory.

"I'm just happy to be here. I've got the biggest smile on my face," Messing said through his facemask. "And I feel full. It's everything. This is the Olympic dream, I never thought I was going to come twice. And here I am.

"After the mind cools down and I start reflecting on everything, I hope I can remember these Olympics as I feel right now."

Dressed in buffalo plaid and skating to "Home" by Phillip Phillips, a tribute to his infant son Wyatt, Messing opened with a big quadruple toe loop, but downgraded the second one to a triple, scoring 265.61.

"I was really hoping for the back-to-back quads today, especially since I’m only putting two in, and since I also did them very, very well this morning back-to-back," said Messing, who'd been ninth after the short program.

Messing said the takeoff wasn't quite right. One foot touched the other as he launched into the air.

"I just I had to triple it for survival," he said. "And honestly, you just wipe it out of your head immediately, and you go on with the program. It's a kind of a forgive and forget, and keep going. And just keep working for every point after that."

Messing only arrived at the Games on Monday after a positive COVID-19 test result kept him from boarding the Canadian charter flight to Beijing. Needing to produce four negative tests to get the green light, he finally was cleared to fly, travelling through Montreal and Milan en route to Beijing.

If adrenaline got him through Tuesday's short program, he was feeling the effects in the free skate.

His positive test meant he missed competing as part of the team event, in which Canada finished fourth. The Canadians could be upgraded to bronze. Medals still haven't been presented for the event that ended Monday. Russia won gold, but Russia's 15-year-old superstar Kamila Valieva tested positive for a banned heart medication before the Beijing Games, the Russian newspaper RBC reported.

"I am very upset that I didn't get to do the team event," Messing said. "I do feel like I let my teammates down on that aspect. But at the same time, I was in quarantine during all of that."

The positive test and quarantine took a toll on his mental health, and so he didn't watch the team event, which he also "felt bad about."

Messing, who competes for Canada because his mom Sally was born in Edmonton, was 12th at the Pyeongchang Olympics, and sixth at the world championships last spring.

Messing will now look ahead to the world championships next month in Montpellier, France, but it won't be his swan song.

"My big dream is to make next year, to make one more year happen," Messing said.

Several hundred fans -- in every other seat for social distancing purposes -- were permitted into Capital Indoor Stadium on Thursday. While fans are instructed to clap politely rather than cheer, for safety's sake, that rule went out the window when China's Boyang Jin skated -- a welcome sound after the countless competitions that have been held in empty arenas over the past two years.

Two skaters hugged in the media "mixed zone" where athletes walk through for post-competition interviews. They were quickly separated by Games staff.

Messing said the COVID-19 precautions have robbed the Games of some camaraderie between athletes.

"It almost feels like a small piece of humanity is being left out," he said.

On Saturday, reigning world bronze medallists Piper Gilles and Paul Poirier begin their quest for a medal in ice dance.