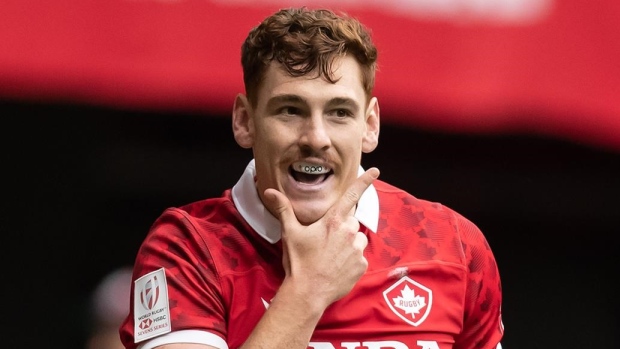 LONDON — The Canadian men finished 13th at the HSBC London Sevens on Sunday but recorded important wins over Wales and Japan to help them in their bid to avoid relegation from the HSBC World Rugby Sevens Series.

Canada came into London, the penultimate stop of the season, in 14th spot overall. The 15th- and 16th-place teams will lose their core status at the end of the campaign.

The Canadians held a slender edge over Wales in the standings with Japan 16th coming into London. The men will wrap up their nine-event season Aug. 27-28 in Los Angeles.

A try by Henry Paterson in overtime gave Australia a 19-14 win over New Zealand in a Cup final that went to golden point after it was knotted at 14 following regulation time at Twickenham. It was Paterson's third try of the final.

The All Blacks, who had won eight of the 10 previous Cup finals between the two, were making their 100th Cup final appearance on the World Series circuit.

Fiji hung on to defeat Samoa 31-26 in the bronze medal match.

Australia arrived in London third in the overall standings behind No. 1 Argentina and No. 2 Australia. New Zealand was 11th, having missed four of the first seven stops on the circuit due to pandemic-related travel restrictions.

New Zealand then beat Fiji 22-19 and Australia defeated Samoa 26-14 to make the final.

After an early penalty against Japan, Coats finished off a fine run by Brock Webster and added the conversion for a 7-0 lead.

Some lax Canadian tackling allowed Kazuma Nakagawa to touch down, cutting the lead to 7-5. But Berna, taking a nifty off-load from Webster, scored under the posts to push the lead to 14-5 with the conversion.

An intercept try by Fijian-born Kameli Soejima, the 50th of his World Series career, narrowed the gap to 14-12 early in the second half. Thiel touched down in the blind side after another fine off-load by Webster to increase the Canadian lead to 19-12.

A handling error by Japan deep in its own territory set up Canada's next score with Oworu celebrating his first try on the circuit with a somersault as he crossed the line. Yuki Ishii appeared headed to a consolation try with 30 seconds remaining but was bundled back into play by Webster and knocked the ball on.

Ishii got some redemption when he scored just before the final hooter.

After going 0-3 Saturday, the Canadians found themselves up against Argentina in the consolation ninth-place quarterfinal Sunday.

Canada's Alex Russell opened the scoring with a fifth-minute try but the South Americans responded with four of their own for a 28-7 win. Coats added a conversion.

It was revenge for Argentina, which was upset 19-12 by Canada last week in pool play in Toulouse, France.

The Canadians then edged Wales 22-21 with Lockie Kratz scoring the go-ahead try with two minutes remaining. Berna, Webster and Russell also scored tries for Canada, which trailed 14-12 at halftime.

Henry Paul's Canadian side has gone through a major roster turnover since last summer's Tokyo Olympics where the Canadian men finished eighth.

The Canadian women finished seventh overall after their six-event season, which wrapped up last week in Toulouse.

This report by The Canadian Press was first published May 29, 2022