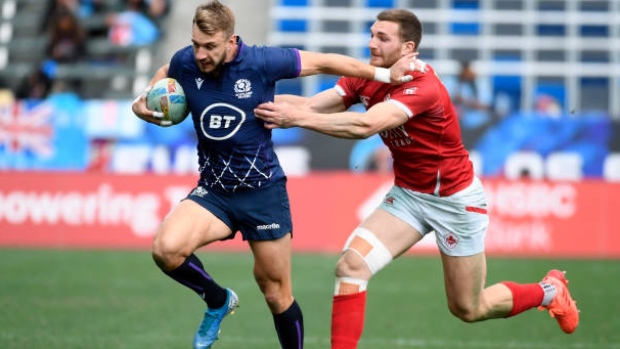 CARSON, Calif. — Canada had to settle for 10th place at the HSBC Los Angeles Sevens on Sunday after losing a 21-19 heartbreaker to Argentina thanks to a Matias Osadczuk converted try with no time remaining.

Canada, which had won twice Sunday to earn the right to meet Argentina, looked to have won the game after co-captain Nathan Hirayama's converted try in the 12th minute. But the Pumas kept coming, tying the score after a quick-tap penalty near the Canadian goal-line and then securing the win on Santiago Mare's conversion in front of the posts.

There was high drama in the Cup final.

South Africa rallied to beat Fiji 29-24 in an overtime thriller at Dignity Health Sports Park. The Pacific Islanders led 19-7 at the half.

Trailing by a converted try, South Africa pressed with no time remaining with a man-advantage thanks to a Fijian being sent to the sin bin for a high tackle. South Africa's Branco du Preez scored and then kicked the conversion to tie it at 24-24 and send the game to sudden death.

Sakoyisa Makata scored to give the Blitzboks the overtime win.

The Fijians stumbled early this season but were coming off a 12-10 championship win over the Blitzboks last time out in Sydney, Australia. South Africa won the season opener in Dubai and was also runner-up in Cape Town.

Series leader New Zealand rallied to edge Australia 21-19 for third place. The All Blacks had won in Cape Town and Hamilton, New Zealand, and were runners-up in Dubai.

South Africa had blanked New Zealand 17-0 in one semifinal while Fiji battered Australia 43-7 in the other.

New Zealand remains atop the standings with 93 points, ahead of South Africa (89) and Fiji (72). Canada remains 10th at 40 points.

The weekend marked the return of the U.S. event to California after a decade in Las Vegas. The teams now head north for next weekend's HSBC Canada Sevens in Vancouver.

Canada came into the U.S. tournament in 10th spot in the overall standings after the first four events of the HSBC World Rugby Seven Series. Argentina was eighth.

After going 1-2-0 in pool play Saturday, Canada bounced back to defeat No. 12 Scotland 24-7 and No. 14 Spain 24-7 in consolation-round to set up the final match against Argentina.

After a tight opening, Canada's Lucas Hammond was sin-binned for an unsuccessful attempt at intercepting an Argentine pass. Mare took advantage immediately, finishing off an Argentine line break for the converted try.

Canada pressed in the final seconds of the first half with Justin Douglas crossing after an offload by Isaac Kaay. Hirayama's conversion tied it at 7-7 at the break.

Mike Fuailefau put Canada ahead with a try early in the second half, stepping past one defender and fending off another for a 12-7 lead.

Argentina responded quickly with a successful chip-and-chase by 19-year-old Marcos Moneta. The conversion gave the Pumas a 14-12 lead. Hirayama intercepted an Argentina pass and raced half the length of the field to restore the Canadian lead at 19-14 with the 12th-minute converted try.

The Canadians opened the season with a ninth-place performance in Dubai before finishing 10th in Cape Town, a season-best fifth in Hamilton and 10th in Sydney.

Earlier, both Canada and Spain came out wearing red jerseys, forcing Canada to change into its white tops in the tunnel.

Canada had to play a lot of defence in the first half but eventually went ahead.

Co-captain Harry Jones scored the lone try of the half, finishing off a line-break by Conor Trainor for a 7-0 lead after the Hirayama conversion. Trainor was making his return to sevens after playing 15s professionally in France.

Jones scored again to open the second half, fending off a Spanish tackler at the end of his run to touch the ball down. Kay then scored after a quick tap penalty by Canada.

Pablo Fontes replied with a late try for Spain, cutting the lead to 10 with Canada down a man in the sin-bin. Douglas, returning to action in California after a lengthy absence due to a broken leg, padded the Canadian lead with a late try.

In the opening game of the day, Connor Braid opened the scoring late in the first half with a solo run after Scotland laid siege to the Canadian goal-line. Braid added the conversion for a 7-0 lead.

Phil Berna, David Richard and Trainor scored in the second half for Canada with Nathan Hirayama adding a conversion. Alec Coombes had a late consolation try for Scotland.

On Saturday, Canada defeated Kenya 24-0 and lost 17-12 to Ireland and 33-5 to South Africa. Ireland tied South Africa 19-19 in the final Group B match to finish atop the group and knock Canada out of Cup quarterfinal contention.

South Africa came to California second overall in the standings while Ireland was ninth and Kenya 11th.