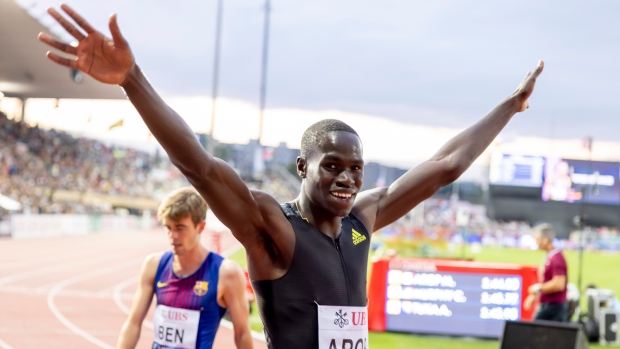 The 22-year-old from Edmonton, who didn't advance out of the semifinals in his Olympic debut earlier this month in Tokyo, ran one minute 44.50 seconds on a gusty night.

Arop beat what was nearly an identical field to the Olympic final. Korir, who made a push to catch Arop down the homestretch, was second in 1:44.62, while Kenyan teammate Ferguson Rotich, the silver medallist in Tokyo, was third on Thursday in 1:45.48.

Arop beat virtually the same field to win the Prefontaine Classic last Saturday in Eugene, Ore. He captured a silver at the Diamond League meet in Stockholm a couple of weeks before the Olympics.

The Canadian is relatively new to track and field, capturing his first international title at the Pan American Games in 2019 in Lima, Peru. He grew up playing basketball, and dreamt of one day playing in the NBA.

This report by The Canadian Press was first published Aug. 26, 2021.