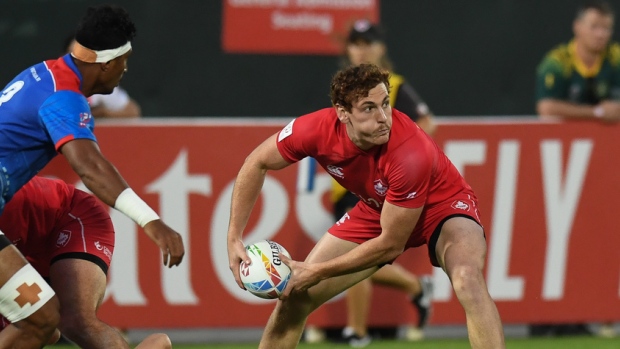 VANCOUVER — The Canadian men want to make a statement early when they face France in their first match Saturday at the HSBC Canada Sevens Rugby tournament.

France is ranked fourth midway through the 10-tournament series with 67 points, 26 back of front-running New Zealand. France lost to New Zealand in the final of the Hamilton, New Zealand, tournament, and finished third in Cape Town.

"We know France is going to be a hell of a game," said coach Henry Paul. "If you can win that, you've probably put yourself in a real good position to make the (final) eight."

The Canadians have drawn into a difficult pool in the 16-team tournament. After France they face 2019 Vancouver champion Fiji, which lost to South Africa in overtime at last weekend's Los Angeles Sevens. Canada wraps up the first day against Wales.

Winger Phil Berna said the men come into the tournament hoping to prove something after coming close last weekend but failing to get the job done.

"We've talked about coming in with a bit of a chip on our shoulders and just making sure that we attack every opposition," said the Vancouver native.

Canada rode a roller-coaster last weekend in L.A. The Canadians opened the tournament with a close 17-12 loss to Ireland, then where pounded by 33-5 by South Africa before putting together lopsided wins over Kenya, Scotland and Spain. They had to settle for 10th place after losing a 21-19 heart-breaker to Argentina with no time remaining.

"We had the opportunity in two games to kind of put it away," he said. "We lost in the death in both of those games. If you've been around long enough, you know that happens. It sucks, but we gave ourselves opportunities to win. That's how it goes sometimes.

"Hopefully we're on the other side of the ball this weekend."

The 31-year-old fly-half from Richmond, B.C., is only the third player in history to surpass 1,800 points.

"It's cool but that’s not my main priority," he said. "When I started playing on this team I'd be pumped if I scored one point. I'm lucky to have played for this long with a great group of guys."

Canada comes into the Vancouver tournament ranked 10th overall. The men opened the season with a ninth-place performance in Dubai before finishing 11th in Cape Town, a season-best fifth in Hamilton, and 10th in Sydney.

Paul is happy with the team's progression.

"We've slowly, steadily been improving," he said. "In L.A., we didn't have the ball for six and half minutes against Ireland. There's not much you can do if you can't get the ball back.

"We learned a lot. We want to use those last few games to prepare us for this tournament."

Canada has the ability to score points but defence remains a concern.

"To win tournaments you've got to defend," said Paul. "That’s the area where we've got penalties. We're still trying to get a handle on what the referees want in terms of a high tackles.

"A lot of what is happening against us is probably our own fault."

The Canada Sevens tournament will be played at B.C. Place Stadium at the same time other sports events around the world are being cancelled or postponed due to the spread of the coronavirus.

"It is a big concern," said Paul. "We're getting daily updates for every country.

"It's really serious and we're taking it seriously. We're washing our hands, we're doing all the right things. Our medical and our support staff are great.

"There's a concern but we still try and get on with it."

There are fears that the spread of the coronavirus could delay or even postpone this summer's Olympic Games in Tokyo. Both the men's and women's sevens teams have qualified for the Games.

"That will take care of itself. Whatever happens, happens."