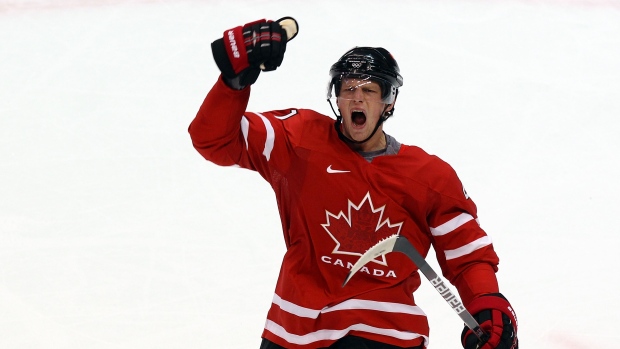 Canada’s roster includes players with NHL experience, others who have participated in an Olympics, and a few prospects getting a huge opportunity on the world stage early in their careers.

25 men have been selected to represent 🇨🇦 at the 2022 Olympic Winter Games.

Leading the pack is 37-year-old Staal, who played in nearly 1,300 games and led the Carolina Hurricanes to a Stanley Cup win in 2006. The veteran centre, who scored 441 goals and added 593 assists over 17 NHL seasons, had signed a professional tryout deal with the AHL’s Iowa Wild recently with hopes of heading to his second Olympics after spending last season split between the Buffalo Sabres and Montreal Canadiens. He helped Canada win gold at the 2010 Vancouver Games.

Power, 19, is the first Canadian defenceman in World Juniors history to score a hat trick. The Mississauga, Ont., native netted three goals against Czechia in the tournament opener on Boxing Day before the event in Edmonton and Red Deer was cancelled due to the COVID-19 pandemic. He was selected No. 1 by the Buffalo Sabres in 2021, but opted not to attend NHL training camp this season, instead returning to the University of Michigan Wolverines for another collegiate season.

Also included on Canada’s roster is 26-year-old forward Josh Ho-Sang, who played 53 games for the New York Islanders over three seasons before heading to Sweden for one year. He’s now playing with the AHL’s Toronto Marlies – he has 20 points in 27 games – after signing a PTO with the NHL’s Maple Leafs heading into the 2021-22 season.

Former NHL centre David Desharnais, who registered 282 points over 524 games with the Montreal Canadiens, Edmonton Oilers and New York Rangers, will get his first chance to represent Canada at the Olympics. The 36-year-old native of Laurier-Station, Que., hasn’t played in the NHL since the 2017-18 season, spending the last three seasons with Fribourg-Gotteron HC in Switzerland.

Ottawa native Eric O’Dell will bring more Olympic experience to the team. The 31-year-old forward, who has 41 NHL games on his resume, was a member of bronze-medal-winning Canada at the 2018 PyeongChang Winter Games in South Korea.

On defence, Power will be joined by Olympic veterans Maxim Noreau and Mat Robinson, who both won bronze in 2018.

Levi, 20, helped Canada win a silver at the 2021 World Juniors. He has a 1.55 goals-against average and a .948 save percentage in 24 games for Northeastern University this season. Levi was selected in the seventh round (No. 212 overall) in the 2020 NHL Draft by the Florida Panthers.

Pasquale has spent the last three seasons in the KHL and owns a GAA of 1.99 and a .916 save percentage in 38 games for Yaroslavl Lokomotiv. The 31-year-old played three games with the Tampa Bay Lightning during the 2018-19 season.

Also in the mix for Canada is centre Kent Johnson, Power’s teammate in Michigan. The No. 5 overall pick (Columbus Blue Jackets) in 2021 is listed as an alternate heading into training camp and could make the team if a player is injured or is impacted by COVID. Justin Pogge, Morgan Ellis, John Gilmour, Chris DiDomenico and Max Véronneau were also named alternates.

The NHL decided last month not to send its players to the Beijing Olympics because its regular-season schedule has been impacted by postponed and rescheduled games due to the number of COVID-19 cases and team outbreaks in 2021-22.