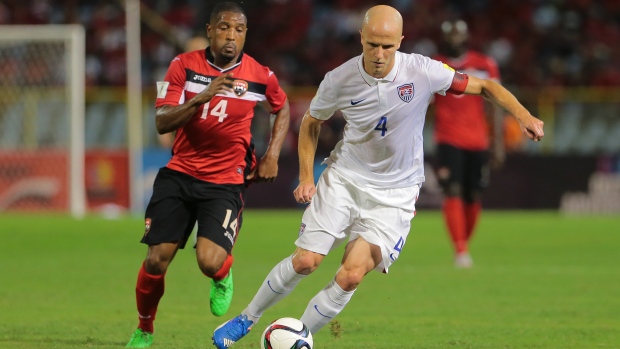 The Canadian men's national soccer team gets back on the pitch for its first international friendly of 2016 on Friday night against a full-strength American team in Carson, California.

Altidore, in his 90th appearance for the U.S., scored his 32nd career goal to move two behind Eric Wynalda for third on the U.S. scoring list. Bradley collected his 19th and 20th career assists, passing Claudio Reyna for third in the U.S. record book.

On the Canadian side, the night could prove special for defender Steven Vitoria.

Nine years after pulling on a Portuguese jersey in Montreal at the 2007 FIFA U-20 World Cup, the veteran could make his Canadian debut Friday.

Born in Toronto to Portuguese parents, Vitoria went to Portugal as a teenager to follow his soccer dream. That journey has brought the 29-year-old back to North America — and Canada's camp.

"It's been great, it's been positive," Vitoria said of his Canadian camp experience so far.

Vitoria, who played for Portugal at the under-19 and under-20 level, is diplomatic about his international soccer history.

"One thing that I was always careful about when I was approached by Canada in the last few years since I went overseas, I always wanted to be respectful," he said. "I never said no. I always explained my situation, that I was more focused establishing myself with my club at the time.

"I was 18 when I went over. Growing up you have to make some decisions. And that was a decision that I made at that time. Portugal gave me a choice that Canada never did at that time. But I don't want to get into how the system was run back them ... All that matters is the moment that we're living (in) now. I'm here with the national team. I'm very honoured and very grateful for this opportunity."

He is proud of his Canadian roots.

Vitoria, who has one year left on his deal with Portugal's Benfica, spent last season on loan to the Philadelphia Union. He expects to return to Europe after the Canadian camp, saying there are a couple of options on the table. He declined to elaborate.

"Anything can happen," he said.

The MLS season did not go as planned with the six-foot-five defender sidelined by injury and playing just 18 games.

"It wasn't as positive of a year as I expected," he said.

Still he spoke highly of the league and the atmosphere at matches. "I'm grateful for the opportunity."

With Friday's Canada-U.S. soccer friendly falling outside of FIFA's international dates, both coaches looked to North America for the bulk of their rosters. It's easier to get teams to give up players during training camp than during the heat of the season.

Vitoria is one of four newcomers to the Canadian team in camp, The others are goalkeepers Tyson Farago and Callum Irving and midfielder Jamar Dixon. Farago and Irving have both been part of Canada's national youth program.