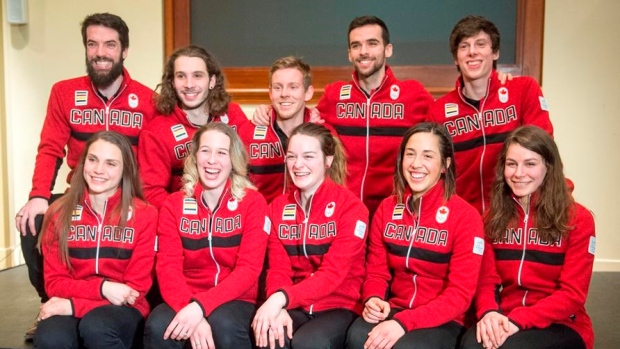 Hamelin, from Saint-Julie, Que., will be joined on the men's team by Samuel Girard of Ferland-et-Boilleau, Que., in the 500 metres, the 1,000 metres and the 1,500 metres. Charle Cournoyer from Boucherville, Que., earned the third available spot in the 1,000 metres while Montreal's Pascal Dion will also be in the 1,500.

"In all my races, I want to be able to say that I left it all on the ice and that I followed my race plan," said Hamelin. "If I'm able to do that, that will allow me to earn my best possible results. Whether that translates into a medal, a win or a fourth-place result, if I feel like I gave it my all, I'll be able to say mission accomplished."

Hamelin also sees himself as a mentor on a team where half the skaters will be competing in their first Olympics.

"I think we have a solid team, there's a good balance and some good chemistry," said Hamelin. "The fact that there are rookies and veterans will allow for a good level of energy and a great atmosphere throughout the Games."

On the women's side, Canada will have the maximum amount of spots — three per individual event. Kim Boutin from Sherbrooke, Que., and Marianne St-Gelais from Saint-Felicien, Que., will be the busiest skaters, as they will both take part in all three individual events.

"I can't wait to leave," said St-Gelais, who will be participating in her third Olympics. "I'm ready, in fact I'm ready beyond the goals in terms of results that I may have. I did what I set out to do, which was to be ready physically, mentally and emotionally, thanks to a plan that I put into action last year with Fabien Abejean (the team's sports psychologist) and in spite of everything that happened this season, I'm at the level I need to be at and I'm ready to go."

All of the skaters are also part of women's and men's relay teams, in addition to Kasandra Bradette from Saint-Felicien, and Francois Hamelin from Sainte-Julie.