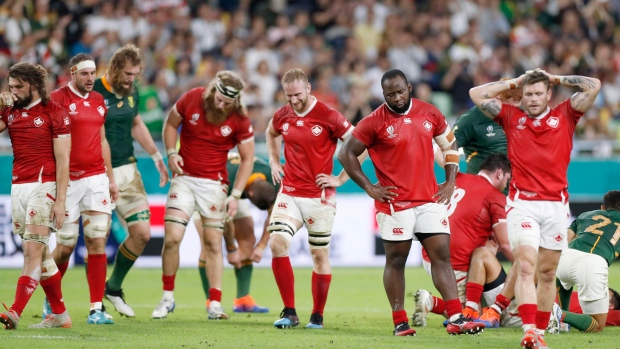 It wasn’t the way Namibia and Canada wanted to end long losing streaks at the Rugby World Cup.

They were gutted but understanding when their Pool B game in Kamaishi was canceled by World Rugby six hours before the scheduled start on Sunday because of flooding and landslides near the stadium caused by Typhoon Hagibis.

It’s just, both were confident of beating the other, and they will have to wait four more years.

Outgoing Namibia coach Phil Davies was happy to take the two points they received for a default draw for the cancellation.

“We gained one point in the last World Cup, and this year we’ve gained two,” Davies said. “Statistically we’ve improved.”

Canada was on a 10-match winless run in the tournament dating to 2011. The Canadians put a ring around this match after becoming the last team to qualify 11 months ago.

“It is a bit of an empty feeling,” Canada coach Kingsley Jones said. “I feel the team’s grown, but we haven’t actually been able to measure our growth. The opposition were about the same level as us. We wanted to measure ourselves here.

“I believe we would have won today. That would have given us a sense of an outcome. This feels like there’s no outcome at the moment. It’s a bit raw.”

Davies said the cancellation was logical: “I’ve never seen so much rain — and being from Wales we see a lot of rain — but it’s been phenomenal.”

Davies said he was sold on Namibia’s amateur ethos but professional attitude when he turned up at scrum training at 5:30 a.m. four years ago.

“The amount of commitment and effort they’ve put in over the last four years has been monumental, phenomenal,” he said. “The last two World Cups have brought pride, passion and respect to Namibian rugby and built on the legacies of the previous four World Cups. The players have to take huge credit for that.”

He said the performances on the field have been getting better with each run, and he reflected on the big first half against New Zealand.

“Last week was a highlight for me,” he said. “Although the scoreboard was unkind in the end (71-9), to be 10-9 with the world champions after 35 minutes was a testament to how far the players have come over the past four years.”

He was proud of where he leaves Namibia, with the establishment of a national academy four years ago and a high-performance center at the national stadium.

“The challenge for the current board is to grow the development side of the game, which for me is the club game. There are some tremendous clubs in Namibia but to go from seven to 10 clubs in the next four-year cycle, to go from 900 players to 4,000 playing the game, and also establish a quality sevens program would be amazing.”

Like Namibia, Canada lost to New Zealand and Italy, and was on a five-day turnaround after a heavy loss to South Africa.

“I still feel the group has grown,” Jones said. “There’s a lot of young players who have got a lot of experience. About 19, 18 of these players will have the ability to play in 2023. We’re in a good place in terms of young rugby players. It’s just making sure that those players get into a daily training environment (in Major League Rugby).”

With no game to play and a mess around them in Kamaishi left by the typhoon, about 15 Canada players and staff grabbed shovels and brooms to sweep mud and debris off roads, and even from inside residents’ homes.

“In times like this there are an awful lot more important things than rugby, and when we got here we saw people’s houses absolutely destroyed, water (rising) up the walls,” Canada flyhalf Peter Nelson said. “We’re just trying our very small part to help them in any way we can.”

Lock Josh Larsen added: “We felt for the people of Kamaishi. (We’re) happy to help.”