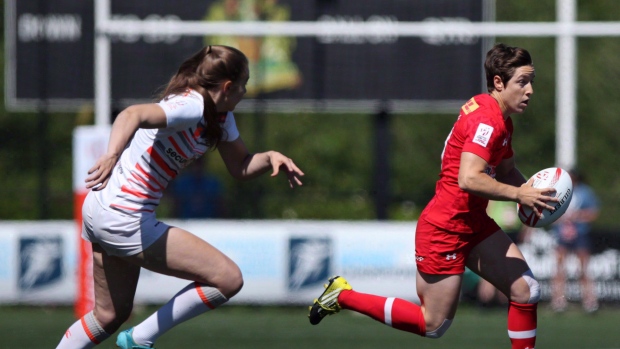 LANGFORD, B.C. — Canada is into the Cup quarterfinals of the World Rugby Women's Sevens Series after posting a 2-1 record on Saturday at Westhills Stadium.

The Canadian women ended their pool competition with a stinging loss 29-14 loss to Australia, the reigning Olympic champions.

The two nations were tied 14-14 early in the second half, but the Canadians couldn't penetrate the Australian end zone and eventually surrendered three consecutive tries late in the contest.

Canada, which posted wins over Brazil and Ireland earlier Saturday, will face the United States in Sunday's quarterfinals.

"A couple too many turnovers, easy turnovers," said Canadian captain Ghislaine Landry after the Australia defeat. "We have to sharpen that up. We just need to have a little composure at the end of the day."

Farella said the Canadians are in good shape heading into Sunday despite the loss to Australia.

"That's a top quality squad and it all comes down to how each team prepares on the game day and how each team capitalizes on each others mistakes," she said. "We feel we had a great day. We executed what we wanted to execute and we made enough mistakes to prepare and capitalize on them Sunday."

Canada's bid for a women's rugby sevens berth in the 2020 Tokyo Olympics took several steps forward with the pair of wins on home soil before a boisterous hometown crowd.

The Canadian women came into this weekend's action as the hottest team in the World Rugby Women's Sevens Series, winning the series stop in Japan last month.

With the top four teams in the season standings securing automatic Olympic qualification, Canada could punch its ticket to Tokyo this weekend given Langford is the penultimate stop on the six-event World Rugby Women's Series. Essentially Canada needs to maintain or increase its points lead over fifth-place France.

"It's never going to be easy," she said. "There's no bad team on that field. There's nothing easy about it, but it's super fun."

Landry of Toronto and Britt Benn of Napanee, Ont., scored Canada's other tries.

And Charity Williams of Toronto scored two tries, while Kayla Moleschi of Williams Lake, B.C., Emma Chown of Aurora, Ont., and Ghislaine and Paquin each added singles in the victory over Brazil.

Canada led 12-7 at the half but dominated Brazil in the second half with four unanswered tries.

Moleschi said the team had a few jitters playing its opening match of the HSBC Canada Sevens at home.

"In the second half we just came out flying and just put the pedal down because we know we want to deliver a message to the rest of the teams that we're going to stay in the entire game," she said.

Paquin said the Canadians will be ready for Sunday.