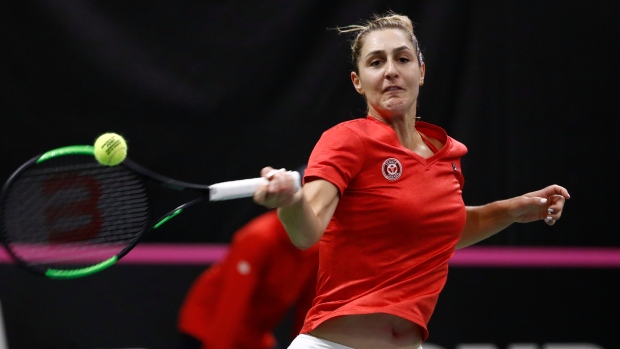 BIEL, Switzerland — Leylah Annie Fernandez's stunning two-set upset of world No. 5 Belinda Bencic was a highlight for Canada despite losing to Switzerland 3-1 on Saturday in the qualifying tie for the Fed Cup Finals.

"It was tough because I know that Belinda is a fighter, she never gives up," said the 17-year-old Fernandez. "Even here at the Fed Cup you want to do the best for your country so I knew it wasn't going to be easy to break her serve again or in the tiebreak to finish it off but I was happy to get one more ball in and get my winners."

The Canadians now drop into a playoff tie in April against a Regional Group I nation for a chance to reach the 2021 qualifiers.

Dabrowski, a doubles specialist, filled in for Eugenie Bouchard of Westmount, Que., who sat out with a left wrist injury. Bouchard said she sustained a wrist injury during a practice session on Thursday.

"There are lots of things that I wish were different but I did the best that I could in that moment."

Reigning U.S. Open champion Bianca Andreescu, the world No. 6 from Mississauga, Ont., was not selected for singles play due to a lingering knee injury. She hasn't played a competitive match since suffering a left knee injury at the WTA Finals over three months ago.

Andreescu was still tabbed to play doubles with Dabrowski in the tie's fifth rubber but with Canada behind 3-1 the match was not played.