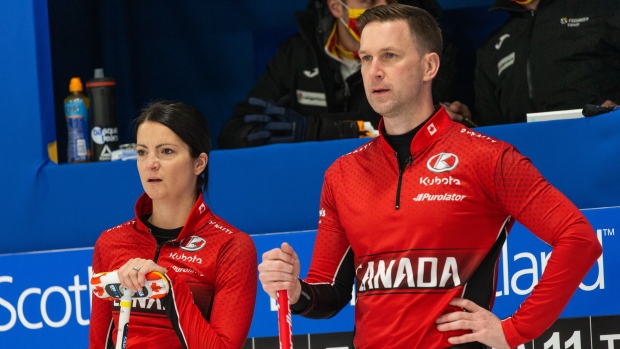 Canada is in Group A and will need to finish in the top three after a nine-game round robin to qualify for the playoffs. Group B also has 10 teams and the top seven overall duos after round robin play will qualify their countries for the Olympics.

Spain misses the game-winning draw as Canada pick up a win in their opening game at the World Mixed Doubles Curling Championship.

Using the power play, Canada was in great position to score multiple points and take the lead, but Kerri Einarson's last throw wrecked on the guard and knocked out one of Canada's shot stones in the rings, leading to a score of just a single. The game is tied with one end remaining.

Spain used the power play in the sixth end, but after some misses, they were forced to make an open hit to score just a single point. They lead by one with two ends remaining.

After Spain's last stone failed to curl enough, Kerri Einarson made an open nose hit to score three and tie the game at 5-5 with three ends remaining.

Canada appeared they were in good position to pick up a steal, but Spain's Mikel Unanue made a beautiful angle tap with the last throw of the end to score the single and take a 5-2 lead at the break.

Spain 🇪🇸 make a perfect tap-up under pressure for a single point to take the lead! 🤩

Canada pull within two by scoring a deuce in the third end. On their last, Spain bumped their own to sit third shot, leaving Canada and Kerri Einarson with a tough draw to score three. Throwing in a wide path, Einarson came up short and Canada settled for the two.

Spain stole another single to expand their lead to 4-0.

Facing three Spanish stones in the four-foot, Kerri Einarson attempted a tap to score a single point on her last throw, but overcurled and pushed Canada's stone into the back eight-foot. Spain leads 3-0 after the first end.