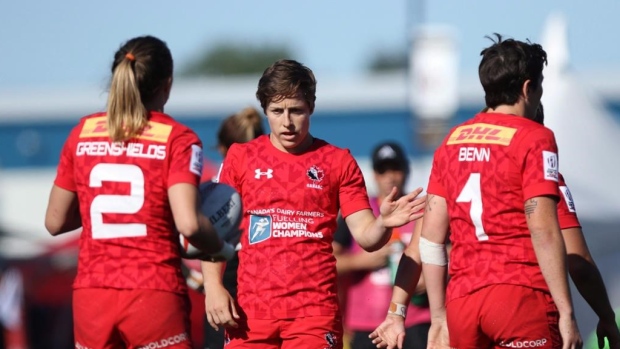 Captain Ghislaine Landry and strike runner Bianca Farella can hit milestones later this month when Canada travels to New Zealand and Australia for the fourth and fifth stops on the HSBC World Rugby Sevens Series.

Landry is one kick away from 300 career conversions, second only to New Zealand's Tyla Nathan-Wong's 379. The 31-year-old from Toronto already leads all women on the circuit with 1,286 points.

Farella, a 27-year-old from Montreal, is one try short of 150 on the series, second behind New Zealand's Portia Woodman's 195. Landry is third with 137 tries.

The Canadian women stand fourth in the standings after three events.

After a disappointing sixth-place finish in the season opener in Colorado, they were runners-up in Dubai and third in Cape Town. Next is up is Hamilton, New Zealand (Jan. 25-26), and Sydney, Australia (Feb. 1-2).

"Dubai and Cape Town were good tournaments for us," Canada coach John Tait said in a statement. "The girls put a lot of work in leading into those events so it was good to see them get on the podium and get rewarded with that. But as a group we were pretty disappointed that we didn't come away on top of the podium — Dubai especially."

"Although we achieved something, they were disappointed we didn't achieve more," he added. "So we'll carry that hunger into these next two stops."

The New Zealand women edged Canada 17-14 in the Dubai final and downed the Canadians 15-5 in the Cape Town semifinal.

Canada starts against No 10 Ireland and No. 7 Spain before wrapping up group play against No. 5 France the next day.

Asia Hogan-Rochester, a former track athlete, will travel with the Canadian team as an injury replacement (for Emma Chown). Hogan-Rochester was part of the gold medal-winning team at the 2019 Pan-American Games.

It marks the first time that the New Zealand women will be playing in front of a home crowd in a HSBC World Rugby Sevens Series event. The Series-champion Black Ferns won four of six events last season and have won two of three this campaign.

The New Zealand and Australia tournaments feature both men and women and the schedule has been slimmed down to two days instead of three. That means shortening the format with the three women's group winners and the best second-place team moving straight into the semifinals with the remaining countries getting one more game for placement purposes.

The Canadian men, 12th in the standings after two events, are in Pool C at the New Zealand event, along with No. 3 France, No. 10 Ireland and No. 14 Spain. Canada opens the men's side of the tournament against Ireland (on Jan. 24 Canada time).

Canada finished 10th in Dubai and 11th in Cape Town.

New Zealand tops the standings after winning Cape Town and finishing runner-up to South Africa in Dubai. The Blitzboks are second.