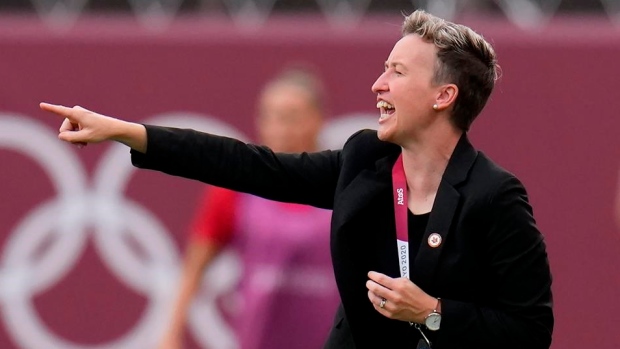 Ever since she was named head coach of Canada’s women soccer team in Oct. 2021, Bev Priestman says she has been on a sprint.

She had fewer than 10 months to prepare for the Tokyo Olympics, where Canada captured gold. Now the team is racing towards World Cup qualifiers, which are just three months away.

As part of their preparations, the Canadians are set to play in a pair of friendlies against Nigeria in the next week. The first game takes place Friday at B.C. Place in Vancouver before shifting to Starlight Stadium in Victoria for the rematch on Monday.

The two games serve as a continuation of the Celebration Tour that started in October in honour of the team winning gold.

On paper, Canada, ranked sixth in the world, appears to be a clear favourite over the 39th-ranked Nigerians, but historically the matches have been close. In three previous meetings, the Canadians have a record of 1-1-1 against the Super Falcons, with their lone win coming in a friendly three years ago (a 2-1 victory).

Nigeria also defeated Canada in the group stage of the 2011 FIFA Women’s World Cup, and Priestman knows they will be a great test for her squad before the 2023 edition of the tournament.

“I think, athletically, Nigeria matches us in many ways,” she told TSN. “I think it's the athleticism. It's how good they are in transition because I think if you're not careful, that can pin you back as well. It's going to be a good challenge for us that we need to navigate because we could get thrown them in the World Cup.”

Before next year’s World Cup in Australia and New Zealand, Canada must first qualify for the tournament in this summer’s CONCACAF W Championship, which begins on July 4 in Monterrey, Mexico. The top four teams in the tournament earn berths in the World Cup.

“In Canada, you don't grow up playing against player-to-player marking,” she said. “If they're not prepped for a struggle – they just don't have that same level of time and space as an individual. I think that's something we need to get better at, not only for Nigeria, but for what we've got coming up [in qualifiers].”

Canada last played in February at the Arnold Clark Cup, a four-team invitational tournament. The Canadians finished third amongst other top-10 opponents: the hosts, England, Spain, and Germany.

But as important as it is for Canada to test itself against the best in the world, Priestman says it is equally vital to have experience against tier-two and tier-three opponents.

“I actually fear playing weaker opposition with this team more and it's something we've got to get better at,” she said. “I feel more comfortable against top 10 [opponents]. I think we’re used to that style. The game's more open. It's more transitional.

“They're all different types of games that that we've got to master before not only this summer, but really in a World Cup. You can go from playing Germany to then go and play a 30th ranked team in the world.”

Priestman, 35, has been dealing with a condensed timeline since she took on the role. Normally, after an Olympic Games, there would be well over a year of preparation before World Cup qualifiers. But after the Tokyo Games were postponed to 2021, Priestman once again has less than 12 months before the next major event for the squad.

While this hampers her ability in areas like player evaluation, Priestman believes it does allow for the team to carry the momentum forward from their gold-medal performance.

“There's a hunger and a desire. When we reset in February, you look in the players eyes and you know that they're ready. Let's go and get to the World Cup. Let's climb that 2023 mountain. The momentum is there. The hunger is there,” she said.

Despite a gold medal to their name, several Canadian players still believe the team hasn’t earned respect on the international stage. It’s a sentiment their coach agrees with.

“We still feel, rightly or wrongly, like that underdog,” Priestman said. “We still feel like we've got a point to prove. I still feel like when players put on the Canada jersey, it's like, ‘Let's go and show them what we can do.’ And I love that. I actually think that's part of our makeup.”

Part of the reason Canadians feel devalued stems from the FIFA Best Awards earlier this year. Goalkeeper Stephanie Labbé, who will be making her final appearance with the national team against Nigeria after announcing her retirement earlier this year, didn’t win Goalkeeper of the Year despite making several key saves during penalties at the Olympics.

Priestman wasn’t among the final three nominees for Coach of the Year, a slight in the eyes of many of her players and her counterpart with the Canadian men’s team, John Herdman.

“I'd much rather be known for winning, and nobody can take that gold medal away,” she said. “If we go and win a World Cup there, then maybe that recognition is easier to go by.”

Along with accomplishments on the field, Priestman says she values seeing the growth in her players. She highlights midfielder Jessie Fleming, who at 23-years-old converted four crucial penalties during the knockout stage of the Olympics to help Canada secure gold.

Fleming is now thriving in her second year with Chelsea FC, recording five goals and four assists this season in the Women’s Super League.

Priestman, who previously coached the Canadian under-17 and under-20 teams, has always shown trust in her younger players, which helped lead to success in Tokyo.

“I think when you see something in someone, and you show them that you believe in them, I always believe that people, when they know that, you get another level out of them,” she said. “I just think I've got enough history to see these players perform when it really matters.”

This belief set the stage for Julia Grosso to score the winning penalty in the gold-medal match just a few weeks shy of her 21st birthday. The midfielder from Vancouver is another example of individual growth that Priestman takes pride in.

At the SheBelieves Cup in February 2021, Priestman’s first official tournament as head coach, Grosso didn’t see any time on the pitch, as Priestman felt she wasn’t ready.

“I was disappointed, and she knew that. And you look at the resilience and the hard work and the mental toughness that it took Julia to turn that around from February to make the Olympic squad and then have the tournament she had. That's the sort of thing that excites me about players is when they react to adversity,” she said.

Priestman’s belief in her younger players was in sharp contrast to Canada’s rivals south of the board, especially during the Olympics, where American head coach Vlatko Andonovski came under criticism for an overreliance on his veterans. Canada beat the U.S. 1-0 in the semifinals, and the top-ranked team in the world had to settle for bronze.

Since that tournament, Andonovski has focused on inviting younger players to U.S. camps over veterans like Megan Rapinoe and Alex Morgan.

Canada is on a collision course with their rival in the final of the CONCACAF W Championship, where it’s not only World Cup qualification on the line. The winner of the tournament will also automatically earn a berth in the 2024 Olympics in Paris.

With a likely rematch ahead, Priestman is keeping an eye on the Americans, but also points out that the U.S. hasn’t faced any top tier opposition since the Olympics, with matches against the Czech Republic, New Zealand, Iceland, and a pair of upcoming friendlies against 48th-ranked Uzbekistan.

“I don't feel like the U.S. have truly been tested since the Olympics,” she said. “The level of opposition that they've played is very different to us, and I think that’s allowed them to trial younger players. But I think it's the direction that team needed to head.”

While Priestman continues her sprint towards World Cup qualifiers, off the pitch, she is keeping busy as well. She announced over the weekend she has joined Autism Canada as an ambassador, after her three-year-old son, Jack, was diagnosed in December.

“You don't know a lot about these things until you have to know about them,” she said. “I just want to use my platform to raise awareness and use that to help drive that community forward. It's something that's really dear to my heart now.”

Priestman said early diagnosis was monumental in helping her son. She and her wife, Emma Humphries, decided to look into a potential diagnosis after Jack was delayed in some of his milestones, like speech.

“I feel in Canada, we're quite lucky. In the U.K., you might not have got diagnosed until six, seven, eight. I'm really grateful that we got early diagnosis and that the support is there,” she said.

“We've seen a massive impact on Jack and how he's moving forward with different milestones. It's something I'm now passionate about and want to help as many people as I can.”