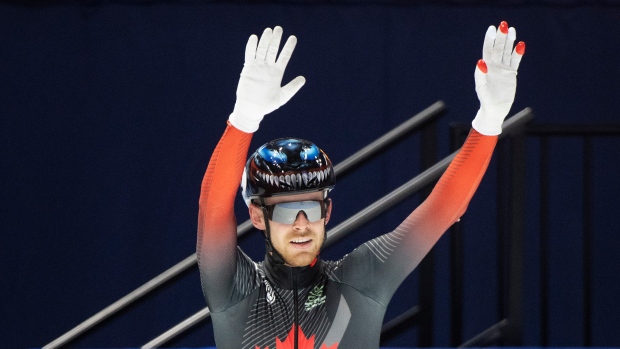 Montreal's Dion won the men's 3,000 metres on home ice at Maurice Richard Arena and then helped Hamelin and Canada take bronze in the 5,000-metre relay.

The relay was Hamelin's swan song and his 38th world championship medal, of which 15 were gold.

"It is one of the best things that happened to me," Hamelin said in a statement. "The chance to finish at home, with my family in the stands, is the greatest feeling. It is almost like any Olympics I went to."

The 37-year-old from Sainte-Julie, Que., had a storybook ending to his Olympic career when he, Dion, Steven Dubois and Jordan Pierre-Gilles won relay gold in Beijing in February.

Hamelin's sixth medal, and fourth gold of his career, is the most by a Canadian male in Winter Games. He and hockey player Marie-Philip Poulin jointly carried Canada's flag into Beijing's opening ceremonies.

Dion edged June Seo Lee of South Korea in second and Dutchman Sjinkie Knegt in third in the 3k. It was the first world title for Dion after he took silver in Saturday's 1,500 metres.

Kim Boutin of Sherbrooke, Que., claimed her third, fourth and fifth silver medals in as many races placing second in Sunday's 1,000, 3,000 metres and the women's relay.

"I am pretty happy. The year was pretty strong for me. So to stay that way and get the second place just gives me the little 'ehhh' to push for the win next time," Boutin added in another statement.

Choi picked up another gold when the South Koreans won the relay ahead of Canada's Boutin, Florence Brunelle, Alyson Charles and Courtney Sarault.

The International Skating Union postponed the world short track championship originally scheduled for March 18-20 in Montreal because of both COVID-19 travel restrictions and the war in Ukraine.

The ISU barred athletes from Russia and Belarus from competing in Montreal because of those countries' roles in the invasion of Ukraine.