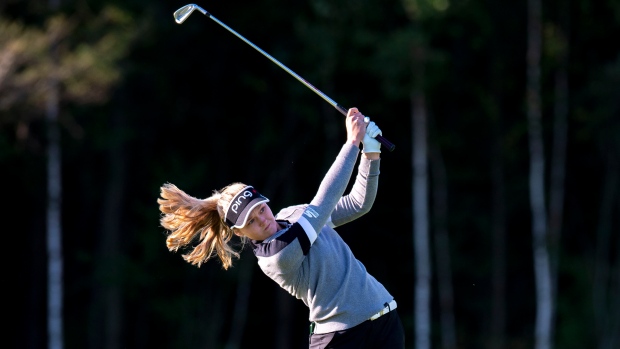 Brooke Henderson hits her approach on the second hole during the CP Women's Open. , The Canadian Press

This time, however, the round was good enough for a tie for second at the national championship (she was sixth a year ago), putting Henderson on track to defend the title she won last year in a cool, blustery Regina.

The 21-year-old used a measured, steady game plan to make seven birdies against just a single bogey leaving her just a shot off the lead held by American Annie Park.

Just like the weather, she was a bit cold at the start of her day but got hot as the round went on.

“I just tried to keep things really simple,” explained Henderson, who finished her day by rolling in a three-foot birdie putt on the 18th hole. “When I showed up this morning, it was really cold and I was like, ‘Uh oh.’ But in the back of my head it was also sort of like Sunday last year, so I figured it might not be a bad thing.”

The round was certainly a consistent one. The Smiths Falls, Ont., native drove the ball in the fairways 12 times in 14 attempts. One of those misses was on the 18th where a favourable lie allowed her to whack her ball two feet from the hole, setting up a closing birdie.

And after missing the greens at the second and fourth, she landed her ball on the putting surface on the next 14 holes.

It should be noted that the fairways at Magna Golf Club are extra wide and the greens Keg–sized, so those numbers weren’t overly surprising.

But if there was a key to the day, it came when she got the putter out of the bag. She used it just 28 times, rolling in a number from 15 and 18 feet. An early must-make came on the second hole when she missed the green on the par 3 and scrambled to get up and down.

“My putter was really hot, especially for me today, which was really exciting,” said Henderson. “Even when I needed to save par, like even on the second hole, that was sort of a testy five-, six-footer. To get that and make par and keep my round alive, to start the day like that was really key.”

Despite the large gallery that followed her round and the fact that she is the defending champion, Henderson looked at ease as she strolled along the manicured fairways of the course north of Toronto. There didn’t seem to be any nerves in any of the 66 swings she made. There was clearly no sign of added pressure despite the fact she was playing at home and is the one player every fan expected to put up a low number.

“Actually, I think it’s quite the opposite,” stated Henderson when asked if there was pressure. “I think I was a lot more relaxed and more confident than I have been other years stepping on to the first tee, just knowing that I have done this before.”

The next step is to follow up the opening round with another good one. With 64 players breaking par on the first day, it appears three more rounds in the deep red will be needed. That means more good ball-striking, more fairways and greens, and definitely the continuation of good putting.

“It’s nice to be in a position where I had a good round,” Henderson said. “Hopefully I can continue to stick to my game plan, make a lot of birdies and I would love to be in this position on Sunday.”

Henderson wasn’t the only Canadian to post a 66. A.C. Tanguay, from Quebec City, surprised fans and herself by equalling Henderson’s mark.

This is her first start in a month and after a busy week with lots of sponsor activities, she wasn’t feeling less than ready.

“Just patience, I think,” said Tanguay, a member of Golf Canada’s Young Pro development team, when asked about the key to her day. “Honestly, it’s been a busy week, so my preparation was, I don’t know – I don't want to say less than ideal, but I just came into it and I really had low expectations.”

She made a single birdie on the first (back) nine but then found some magic with her putter on her second nine, dropping putts of varying lengths. It got so crazy that she seemed to know before she struck the putt that it was going to drop.

“On the back nine, it would’ve been like 16, my seventh hole maybe, I was over the ball and I was just laughing because I just had this feeling that I was going to hole it again. I saw it go straight in the middle. I was really laughing really hard because I thought it was just hilarious that everything literally was going in.”

Tanguay could definitely use a good finish. She’s currently 122nd on the LPGA’s money list. The top 100 players at the end of the season retain their playing privileges for next year. Like Henderson, she’ll try to keep the birdies flowing in Friday.