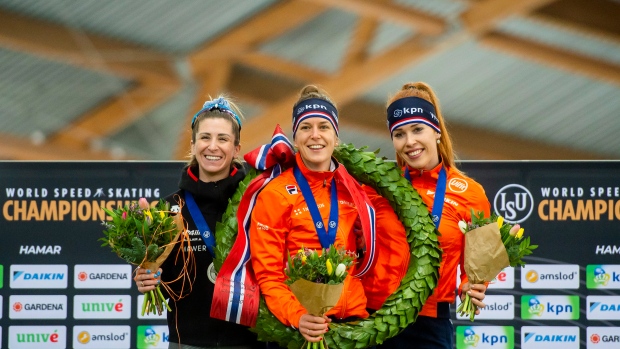 HAMAR, Norway — Ivanie Blondin captured a silver medal in the overall standings at the ISU world allround speedskating championships on Sunday, the punctuation mark on a season that has seen her dominate at multiple distances.

The 29-year-old from Ottawa is the first Canadian woman to reach the overall podium at the event since Christine Nesbitt in 2012.

Blondin had a cumulative time of 160.462 seconds over four races, 9.38 seconds behind world champion Ireen Wust of the Netherlands.

"I'm pretty happy with the end result and with this weekend overall," Blondin said. "It's always been a dream of mine to reach the podium at the world allround championships. My 1500 didn't go super great, and I almost fell in the 5000, but it's a learning process. I think I showed consistency to finish second overall, and while today wasn't great, I'm looking forward to when allrounds come around again."

Wust was crowned world allround for the seventh time in her career, reaching the podium in three of four distances. Dutch teammate Antoinette de Jong won the bronze.

Ted-Jan Bloemen of Calgary, Alta., was the top Canadian in the men's event in seventh. Jordan Belchos of Toronto was a career-best eighth.

Patrick Roest of the Netherlands earned his third consecutive world allround title, ahead of Sverre Lunde Pedersen of Norway and Seitaro Ichinohe of Japan.