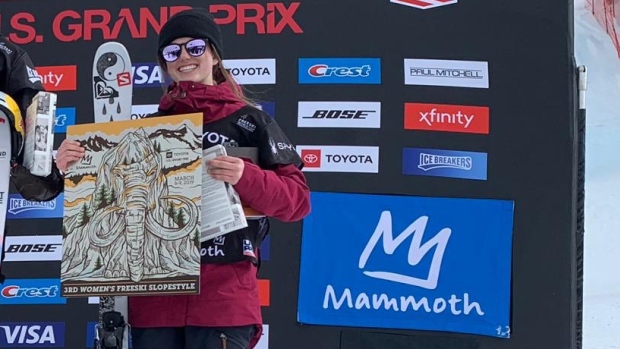 CALGARY — Although Megan Oldham had her sights set on gold, she wasn't too upset to come away with bronze on Saturday.

Despite leading with two competitors to go, the 18-year-old skier from Parry Sound, Ont., wound up finishing third behind China's Eileen Gu and Switzerland's Mathilde Gremaud in women's slopestyle at a World Cup freestyle skiing event.

"No, because both of them really deserved it," said Oldham when asked if she was disappointed to fall back into third. "Their runs were insane. They were super clean (with) super grabs. I'm super grateful just to land on the podium."

Oldham's score of 80.70 in her first of two runs down the slopestyle course at Canada Olympic Park put her in first place until Gu and Gremaud moved past her in the second round.

"I felt really good after my first run, for sure," Oldham said. "I know I was struggling a bit with speed originally so to be able to go that big, I was super, super happy."

Gu posted an impressive score of 89.18 to win her second gold in as many days at the FIS Freeski and Snowboard World Cup, which was billed as Snow Rodeo.

On the last run of the afternoon in the women's competition, Gremaud earned a score of 87.13 from the judges to finish in second spot, bumping Oldham to her bronze-medal showing.

Evan McEachran of Oakville, Ont., finished just off the podium in fourth spot in the men's slopestyle event after posting a score of 82.43 on his second run.

"The Canadian crowd was awesome," said McEachran, who hopes to compete at the Calgary Snow Rodeo again next year if it's back on the World Cup schedule. "It's just nice to be competing on Canadian soil again, because it's been a while.

"It's amazing. Fingers crossed it happens again because it just feels a lot homier. Everyone in the crowd is cheering for all the Canadians. It's a pretty nice environment to put yourself in."

Fellow Canadian Etienne Geoffroy Gagnon of Whitehorse, Yukon, finished seventh out of the 16 skiers in the final with his best score of 79.81 on his first run, while Calgary's Mark Hendrickson had a pair of disappointing runs and finished well back in 13th spot.

After scoring 86.25 points on his first run, Swiss skier Andri Ragettli improved to 88.73 on his second trip down the hill to win finish first and win gold.

Americans Colby Stevenson and Nicholas Goepper finished in second and third respectively with scores of 88.60 and 86.36.

In the men's snowboard halfpipe final on Saturday evening, Toronto's Derek Livingston had a disappointed showing as his best score from his three runs was only 61.00 points, which landed him in seventh spot out of 10 competitors.

Japan's Ruka Hirano won gold thanks to his impressive third run of 94.75 points.

Australia's Scotty James, the last competitor in the event, was unable to improve upon his best score of 92.25 and had to settle for silver.

Switzerland's Patrick Burgener finished third with a score of 89.50.

In the women's snowboard half-pipe final, China's Xuetong Cai won gold with a score of 87.25, Japan's Mitsuki Ono took silver with 84.25, while China's Jiayu Liu posted a score of 82.75 to capture bronze. No Canadian women qualified for the final.