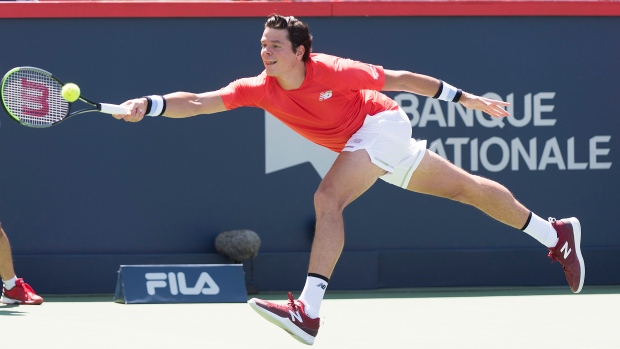 MONTREAL — In the midst of a frustrating, injury-ravaged season, Milos Raonic has learned to keep his expectations in check.

The Canadian's big frame didn't let him down Monday on home soil.

Raonic's booming serve produced 16 aces — including 10 in the first set — to overpower France's Lucas Pouille 6-4, 6-4 in men's first-round action at the Rogers Cup.

The 28-year-old's career, while wildly successful with eight singles titles and nearly US$19-million in earnings, is dotted by a laundry list of physical ailments.

"It's led to a lot of disappointment," Raonic said of the various injuries, including knee and back issues, that have limited him to 10 events. "I'm still trying to find the first tournament I can get through healthy this year.

"That alone is pretty tough to swallow, but it is what it is. I just try to go out each week as best prepared as I can be (and) try to give it everything."

Denis Shapovalov — another Canadian looking to rediscover his form — then took centre stage on centre court in the evening session and didn't disappoint.

The 20-year-old from Richmond Hill, Ont., downed France's Pierre-Hugues Herbert in a rollercoaster 6-3, 7-5 affair that saw him overcome eight double faults and fight off three of four break points.

Winless in his last five outings and just 2-9 since March coming into Monday, Shapovalov is hoping to recapture the magic that saw him grab the hearts of Montreal tennis fans two years ago at age 18 when he upset world No. 2 Rafael Nadal on the way to making the semifinals.

"I kind of had a fresh start, taking a couple weeks off," Shapovalov said. "I wasn't serving the best. I was just trying to fight out there.

"It's honestly a dream come true to be going out there prime match, playing in front of so many people, so many people that are backing me."

Herbert, 28, broke the 31st-ranked Shapovalov to open the second set thanks to two double faults, but the Canadian broke his 40th-ranked opponent right back.

The two held serve from there until Shapovalov broke Herbert again up 6-5 when his looping shot went long on match point, much to the delight of the fans in Montreal.

Shapovalov raised his arms in celebration and waved to the adoring crowd. He even tried some spotty French in his post-match interview after the players shook hands.

"Montreal is a very special crowd," Shapovalov said. "I feel like they're playing every point with me."

Despite the victory, Shapovalov will need to be a lot sharper in his second-round match against No. 2 seed and fourth-ranked Dominic Thiem of Austria to have any hope of advancing.

"I'm just going to try to go out there, enjoy myself, put up the best fight I can," Shapovalov said. "I think I do have a chance to win this match. I really believe it.

"I'm going to do everything that I can to try to accomplish that."

The six-foot-five Raonic, ranked 20th in the world, dispatched Pouille in just one hour 12 minutes at IGA Stadium in Monday's afternoon session.

Raonic broke Pouille in the third game of the first set and did the same midway through the second before closing things in tidy fashion.

The victory was the Thornhill, Ont., product's first in Montreal since making it all the way to the 2013 final when he lost to Nadal.

"I remember my matches quite well," Raonic, who has failed to advance beyond the second round of the Rogers Cup since 2016, said with a smile of his dry run in Quebec. "So it's not something that I just miraculously forgot."

In other matches involving Canadians, wild-card entry Peter Polansky, also of Thornhill, gave world No. 20 Gael Monfils a scare early, but the tour's 172nd-ranked player wound up falling 6-7 (4), 6-3, 6-3 under the lights.

Earlier in the day, Brayden Schnur of Pickering, Ont. — another wild-card — fell 6-1, 6-2 to qualifier Tommy Paul of the U.S.

The women's side of the 2019 bracket is being played in Toronto. The tournament alternates between the cities every year.

Raonic fell to Pouille, the world No. 29, in the quarterfinals of the Australian Open back in January, but improved to 4-1 all-time against the 25-year-old with Monday's win.

The top-ranked Canadian was supposed to open against Taylor Fritz of the United States, but was bumped up when South Africa's Kevin Anderson, the ninth seed, pulled out of the $5.7-million ATP Tour Masters 1000 series event.

"It was a tough first round," Raonic said. "To play well (and) get the wheels going in a positive way, I have to be happy."

Raonic will now face either Montreal native Felix Auger-Aliassime (ranked 22nd) or Vancouver's Vasek Pospisil (207th) in the second round.

Auger-Aliassime and Pospisil — coincidentally playing together for the first time in doubles Monday — fell 7-6 (7), 7-5 to veteran French duo of Jeremy Chardy and Fabrice Martin.

"It was good to feel the atmosphere," said Auger-Aliassime, who was making his first Rogers Cup appearance in Montreal. "We had some great moments."

Set to turn 19 on Thursday, the rising star said it was good to get some of the jitters out before his singles debut at his home tournament.

"For me to finally walk through that tunnel was a great feeling," Auger-Aliassime said. "We kind of broke the ice, both of us."

While unfortunate, Raonic said meeting a fellow Canadian early at the Rogers Cup is a byproduct of having six players from north of the 49th parallel on tour.

"I'm sure the odds are much higher than they have been in the past," he said. "That's just how it plays out sometimes."