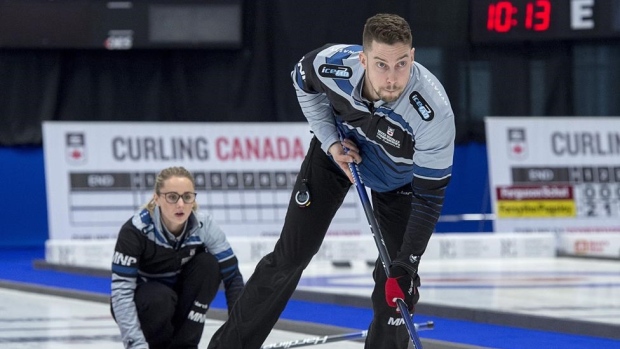 After coming just short of world mixed doubles curling gold three years ago, Brett Gallant and Jocelyn Peterman will soon get another chance to become the first Canadians to reach the top of the podium at the event.

They were selected by Curling Canada to represent the country at this year's competition, which begins Saturday in Geneva.

"They have a ton of experience playing together in mixed doubles and they have great resumes on the four-person side as well," said national mixed doubles coach Scott Pfeifer.

Peterman, from Winnipeg, and Gallant, from St. John's, N.L., settled for silver after dropping a 6-5 decision to Sweden at the 2019 event in Stavanger, Norway.

The two-time national mixed doubles champions were picked to represent the country after last month's Canadian championships were scrubbed due to the pandemic.

It's the second straight major international mixed doubles event where Curling Canada has selected the team. Rachel Homan and John Morris were picked for the Beijing Olympics, but they didn't make the playoffs.

Peterman and Gallant weren't available for Olympic mixed doubles as they were representing Canada in four-player competition at the Ice Cube. Unlike most federations, Curling Canada doesn't allow curlers to play in both disciplines at the same Games.

"As an athlete, you never know when you’ll get those opportunities and have to appreciate when they come around," Peterman said. "Like everyone else, we wished we could have competed for this chance to represent Canada, and we won’t take this for granted.

"We want to make our country proud in Switzerland.”

Peterman and Gallant, who are engaged to be married this year, won the Canadian mixed doubles championship in 2016. They didn't compete at the world championship that year due to scheduling issues with their four-player teams.

Currently ranked eighth in Canada, they will open play Saturday against Germany at the Curling Club Trois-Chene.

Since Beijing, Gallant's team won a national title and took silver at the recent world championship. This mixed doubles event is sandwiched by a pair of Grand Slam competitions in Canada.

The second-place showing in 2019 was the last time Canada reached the podium at the world mixed doubles championship.

“Since 2019 we’ve been wanting to get back to this event and improve on our silver-medal finish," Gallant said. "We’ve both learned a lot since then with some big wins and heartbreaking losses while representing Canada at the Olympics.

"Those were all character-building moments and we’ll use those to come out strong at worlds this year."

Spain and Denmark were late entries in the 20-team field at the World Curling Federation event. Spain got a spot after Russia's removal and Denmark replaced China, which withdrew due to COVID-19-related travel restrictions.

"I definitely think they're capable of being at the top of the standings at the end of the week," Pfeifer said of Gallant and Peterman.

Round-robin play continues through Thursday. The top three teams from each 10-team group will advance to the playoffs.

The world senior curling championships will run concurrently at the same Geneva venue.

Alberta's Wade White will compete in the men's event and Saskatchewan's Sherry Anderson is the Canadian representative in the women's competition.

This report by The Canadian Press was first published April 22, 2022.