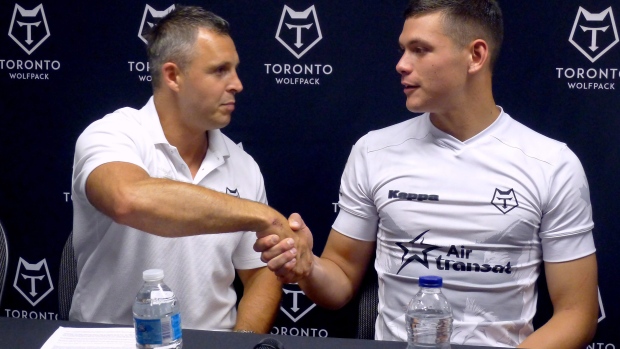 TORONTO — Canadian Quinn Ngawati is back with the Toronto Wolfpack.

The Wolfpack said the 20-year-old from Victoria, who left the team in October 2018, will begin playing for League 1 side Rochdale Hornets while working out and training with the Wolfpack full-time. Toronto has a player development deal with Rochdale.

While Ngawati (pronounced Now-r-tee) has just three games with the Wolfpack under his belt, the six-foot-four, 240-pounder is seen as a talented athlete. And he will not count against Toronto's salary cap thanks to a dispensation agreed to for the Wolfpack, who are not eligible to get other salary cap breaks because they do not have an academy.

But he remains a long-term project in rugby league.

Ngawati is the first Canadian-born player to appear in a professional rugby league game. Then 18, he made his debut off the bench in July 2017 against Gloucester All Golds in a 62-10 Wolfpack win in the third-tier League 1. He also played in Toronto's next game.

In March 2018, he was loaned to London Skolars, scoring one try in nine games before being recalled to Toronto to play the final game of the Betfred Championship season against Featherstone Rovers. The Wolfpack have an ownership share in the Skolars.

Ngawati left Toronto at the end of the 2018 season, returning to rugby union. Most recently he has split time training with the Canadian senior sevens team and the Pacific Pride Development Academy.

"Everyone at the club talks positively about Quinn and the impact he had on the early days of the Wolfpack," coach Brian McDermott said in a statement. "He has done all the right things in the intervening years and we are delighted to welcome him back into the fold."

Toronto plays the Huddersfield Giants in the fifth round of Coral Challenge Cup play Wednesday.

The Wolfpack also confirmed Tuesday that veteran back Gary Wheeler has left the club. A Day 1 member of the franchise, Wheeler's time in Toronto was disrupted by injury.

Injuries and salary cap issues have hampered the Wolfpack (0-6-0) during their debut season in Super League. The team started the season with just 23 players, including New Zealand international back Chase Stanley (stranded by visa issues) and Greg Worthington (on loan to Featherstone).

Rugby league teams dress 17 players for games including 13 starters and four on the interchange bench.

Stanley and Worthington are both back with the team. And the team has added French international Tony Gigot on a one-month trial and Wigan's Ben Kilner and Jack Wells on one-month loans.

Winger Matty Russell (groin) and hooker Andy Ackers (foot) were injured last time out in a 66-12 loss at Leeds. The Wolfpack hope Russell will be back next week while Ackers will likely play Wednesday through the pain of torn ligaments between his toes.

Mellor is available this week, as is Stanley. But Lussick, while training again, won't be ready Wednesday due to back spasms.

Veteran forward Jon Wilkin, who has been putting off a procedure to have his knee cleaned out, likely won't play. McDermott said Wilkin may have the operation sooner than later. The concern is once his knee is opened up, more work may be needed which could keep him out for months rather than weeks.

Ngawati was one of three players to survive the Wolfpack's initial round of tryouts. He was famously in class at St. Michaels University School in Victoria when he was summoned by the team.

Ngawati's father is from New Zealand with Maori roots — a background proudly illustrated via the tattoo on the back of Quinn's calf. Ngawati Sr., played rugby league so Quinn grew up immersed in both union and league. His mother is Canadian, meeting her future husband in New Zealand.

Ngawati has represented Canada in rugby league play (in 2017) and in rugby union at the youth level.

The Wolfpack had two other Canadian internationals in Rhys Jacks and Tom Dempsey in the 2017 inaugural season. But both were Australian-born, qualifying to wear the Maple Leaf by virtue of their bloodlines.