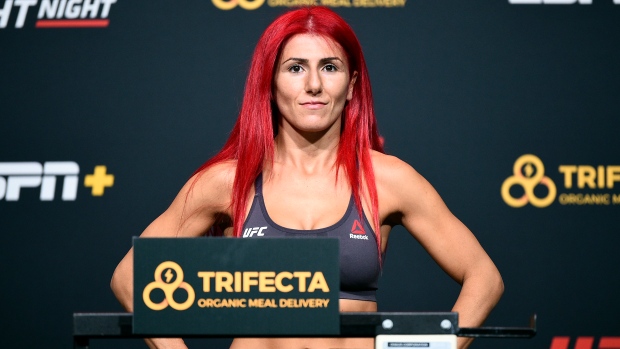 Canadian strawweight Randa (Quiet Storm) Markos has had to drop off this weekend's UFC 260 card after contracting COVID-19.

"Hey everyone. I've got some horrible news. I got COVID and my fight is off," Markos said in a video posted on social media. "But the good news is we're rescheduled for May 1. So 10 days of isolation, then I'm heading back to the gym, continuing my camp and we'll be back at it May 1."

Markos was slated to take on Brazil's Luana Pinheiro at UFC 260 at the UFC Apex production facility in Las Vegas. Now they will meet May 1 on a card headlined by light-heavyweights Dominick (The Devastator) Reyes and Jiri (Denisa) Prochazka of the Czech Republic. Reyes is ranked third among 205-pound contenders while Prochazka is No. 5.

There are two other Canadians on the UFC 260 card.

Robertson and Miranda were supposed to meet Feb. 13 at UFC 258 but the Canadian had to withdraw due to a non-COVID-related illness.

The 35-year-old from Windsor, Ont., lost a decision to Japan's Kanako Murata last time out in November.

Pinheiro (8-1-0) is making her UFC debut after posting a first-round KO win in November over Stephanie Frausto in Dana White's Contender Series. The 27-year-old Brazilian has won her last six outings.

This report by The Canadian Press was first published March 23, 2021.