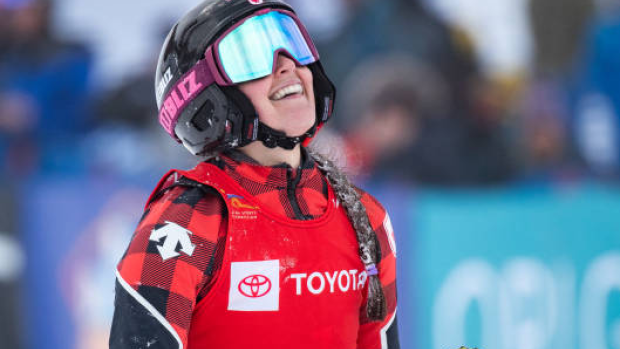 SUNNY VALLEY, Russia — Marielle Thompson of Whistler, B.C., had to settle for fourth on Saturday in the first of two World Cup ski cross races in Sunny Valley, Russia.

Thompson, who won her quarterfinal and semifinal heats, was edged to the back of the pack in the big final and was unable to make any passes, falling steadily behind the leaders.

"I think I skied pretty well all day, especially my first two heats," said Thompson who has been on the podium five times this season, capturing world championship gold, along with three World Cup silver and one bronze. "In the final, I kind of got cut off in the start section and didn't have anywhere to go from there. Hopefully I can build on some good skiing today into tomorrow."

Brittany Phelan of Mont-Tremblant, Que., and India Sherret of Cranbrook, B.C., went up against Thompson in the semifinal, with Sherret taking third in that heat to move on to the small final. She finished the day in eighth, matching her best finish this season earned in Italy last December.

"I'm pretty happy with how today's race went. It's been a tough season — I haven't moved past the first round often," said Sherret, who has stepped onto the World Cup podium once in her career so far, earning bronze in Sweden last season. "Today, I broke through that mental barrier. Skiing fast and having fun is what I'm here for, and it was good to feel that again today."

Phelan, meanwhile, got into trouble coming over a roller and lost her footing in the semifinal, costing her a shot at the podium. She won the small final to earn a fifth-place finish for the day, while Kelsey Serwa of Kelowna, B.C., and Edmonton's Abby McEwen also recorded top-15 results, finishing 10th and 14th, respectively.

Switzerland's Fanny Smith climbed to the top of the podium in the first race of the double-header at Sunny Valley. Sweden's Sandra Naeslund finished second, and Austria's Andrea Limbacher was third.

In men's ski cross action, some very tight heats in the eights put Canada's racers in heavy traffic, and they weren't able to make their way to the front of the pack. All three qualifiers saw their race-day end after just one heat, with Montreal's Chris Del Bosco finishing 24th, Calgary's Brady Leman 25th, and Toronto's Kevin Drury landing in 26th place. Zach Belczyk of Banff, Alta., didn't crack the top-32 in qualifications, and logged a 36th-place result.