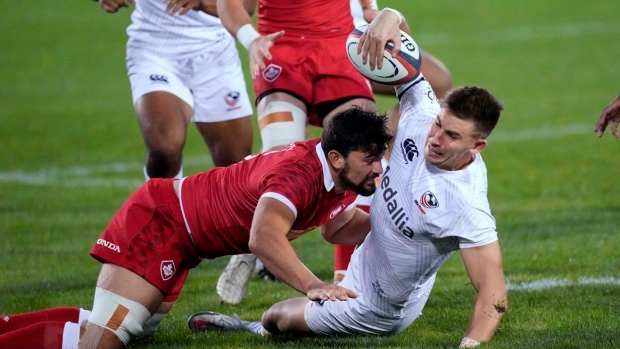 BRUSSELS — Canada survived an early red card to defeat a young Belgium side 24-0 Saturday, evening its record on its two-game European rugby tour.

The Canadian men, ranked 23rd in the world, built an early 10-0 lead against the 28th-ranked Belgians before being reduced in numbers. Canada then took advantage of Belgian penalties and fatigue to add to the score in the second half, with a late try extending the lead as rain fell at Nelson Mandela Stadium.

Canadian flanker Michael Smith was sent off in the 18th minute for a shoulder to the face of Belgian lock Guillaume Mortier while trying to clear a ruck. Captain Lucas Rumball tried to protest the ejection, but was shut down by Italian referee Andrea Piardi, who produced the red card after going to a sideline monitor to review the play.

Canada lost another man, replacement hooker Eric Howard, for 10 minutes to the sin-bin in the 47th for a dangerous clearance attempt at the breakdown.

"Well, we don't like making things easy for ourselves, that's for sure," said Canadian coach Kingsley Jones. "The red card, really, I thought it gave the Belgian team a lot of hope. A lot of passion came through. And that next 10-15 minutes, we struggled to stay in the game. But we managed to do that and I'm very very proud of the team's performance in the second half — 14 players and at times 13 players.

"So we don't want those scenarios, but I thought the way we maturely managed the field position, played in the right areas (and) in the end to come away with a 24-0 victory with 14 players for nearly the whole game is a big tick for the mentality of the team. And it's a starting point for us in terms of where we go from here."

The Belgians had 11 potential debutants in their matchday squad.

The two teams had met just once before, with Canada winning 43-12 in Brussels in November 2010.

Canada lost 20-17 to No. 19 Portugal last Saturday in Lisbon with Manuel Cardoso Pinto scoring a late try to negate a Canadian comeback. It marked Portugal’s first win over Canada in five meetings

The November tour followed World Cup qualifying series losses to the 18th-ranked U.S. and No. 26 Chile in September and October, respectively. Saturday's win evened Canada's record to 3-3-0 in the fall tests.

Canada struck in the third minute with Ben LeSage slicing open the Belgian defence and then offloading to Thomas. The big No. 8 scooped up the low pass and went over for the try, his third of the tour. Povey's conversion made in 7-0.

After Henri Dequenne missed a penalty kick for Belgium, a scrum infraction led to a Povey penalty and a 10-0 lead in the 13th minute.

The Belgians came on after the red card and the Canadians did not help their own cause, with several lineout and handling errors negating attacks deep in Belgian territory.

"Coming out of the changing room (at halftime) we tried to get back to what we were good at, which is running the ball and taking the points when we can," said Rumball.

There was some niggle early in the second half, prompting the referee to speak with both captains after some pushing and shoving.

Povey missed a chance at increasing the lead when he was just short on a 49th-minute penalty. Jones, with Canada still at 13 men, took over kicking duties and was on the mark in the 56th minute to make it 13-0. Jones' penalties in the 63rd and 65th minute made it made it 19-0.

Braude, the replacement scrum half, scored an opportunistic try in the 77th, regaining a Canadian kick deep into Belgian territory to score in the corner for a 24-0 lead

The Belgians, playing their third test of the year, were coming off a 23-21 loss to the Netherlands in May in a Rugby Europe Championship playoff. That relegated the team known as the Black Devils to the second-tier Rugby Europe Trophy.

Jones made four personnel changes with No. 8 Thomas, prop Tyler Rowland, scrum half Jason Higgins and wing Isaac Olson slotting into the starting 15. Olson earned his first cap while Higgins made his first start.

Brock Webster had been slated to start at fullback. But he fell ill prior to the match — a Rugby Canada spokeswoman said it was not COVID-related — and was replaced by Povey.

"Brock Webster was transported to hospital for treatment this morning — he is recovering and watching his team play," Rugby Canada said via social media.

The third-ranked Canadian women face No. 1 England in London on Sunday.

This report by The Canadian Press was first published Nov. 13, 2021