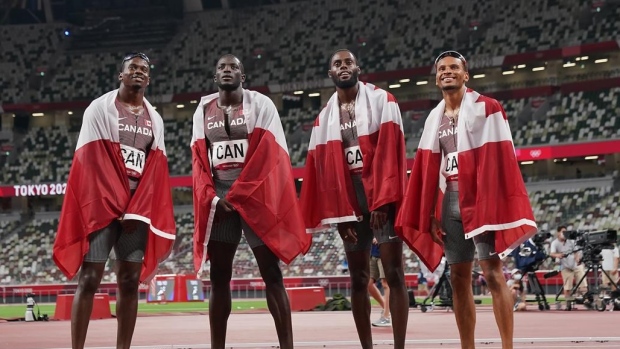 Canada's men's 4x100 relay team is a step closer to officially getting their silver medals from the Tokyo Olympics.

The British Olympic Association said in a statement on Thursday that it has been formally asked to return its relay team's medals to the International Olympic Committee.

The request comes after the Court of Arbitration for Sport ruled against British sprinter Chijindu Ujah in February and paves the way for Canada's team to get their silver medals instead.

“We’re happy the 4x100 metre athletes will be receiving the medal they earned, and we know their performance inspired many during the difficult second summer of the pandemic," Eric Myles, chief sport officer of the Canadian Olympic Committee, said in a statement. "Though the anti-doping process worked, it’s disappointing that we’re still seeing doping cases robbing athletes of their moment at Games.

"We haven’t received a timeline for awarding the silver medals yet."

Ujah was part of the British quartet alongside Zharnel Hughes, Richard Kilty and Nethaneel Mitchell-Blake that finished second to Italy in a close race by 0.01 seconds in August. But a sample taken from Ujah after the race was found to contain the prohibited substances ostarine and S-23, which are muscle-building selective androgen receptor modulators.

"It is with real sadness that we have had to ask for the medals, certificates and pins back, especially for the three athletes who have been affected through no fault of their own," said British Olympic Association CEO Andy Anson in a statement.

"However, this is the CAS ruling and we must abide by it, just as we have been clear that must happen to other nations whose athletes have broken doping rules."

Canada, which finished third in the race, moves up to silver with China moving up to bronze. The Canadian team consisted of Andre De Grasse, Aaron Brown, Jerome Blake and Brendon Rodney.

The process for upgrading medals after a doping violation can be painstaking.

Canadian Dylan Armstrong finished fourth in shot put at the 2008 Beijing Olympics and so never climbed the Olympic medal podium. Years later, he was upgraded to bronze after Andrei Mikhnevich of Belarus was disqualified for doping.

Armstrong finally received his medal — Canada’s first in shot put at an Olympics — at a ceremony in his hometown of Kamloops, B.C., in 2015, seven years after the actual competition.

This report by The Canadian Press was first published April 14, 2022.