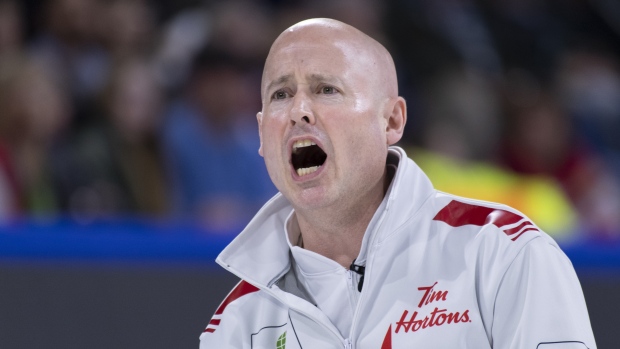 LETHBRIDGE, Alta. — The parity among the elite teams has been on full display this week at the world men's curling championship.

It resulted in a playoff picture that wasn't clear until the completion of the final round-robin draw at the Enmax Centre.

Canada's Kevin Koe won both of his games Friday to secure the No. 3 seed. He beat Switzerland's Peter De Cruz 10-3 in the morning and defeated Jaap Van Dorp of the Netherlands 6-5 in the evening.

"These chances, they don't come too often," Koe said. "You're in the playoffs at a world championship, especially in our home country and home province. We want to win really bad."

Sweden's Niklas Edin (11-1) secured the top seed earlier in the day. Switzerland (9-3) beat China 8-4 in the evening to wrap up the No. 2 seed and the other direct semifinal berth.

Scotland defeated Italy's Joel Retornaz 9-5 in a win-and-you're-in game to get the sixth seed.

"There's no easy games out here," Koe said after his morning win. "It just seems like anyone can beat anyone. A good team is probably not going to make the playoffs here."

In the end, Italy missed the six-team cut despite a 7-5 record.

Only Japan and Sweden had secured playoff spots at the start of the day.

Edin picked up an 8-4 morning win over Shuster and the defending champion then topped Italy 7-4 in the afternoon, a result that ensured Koe, Shuster and De Cruz would make the cut.

"There's a bit of separation from the top teams and the bottom teams," Koe said. "Not a lot of upsets here. I guess when that happens, more than half the field is going to have a chance."

Tiebreaker games are not used at this event. Head-to-head records and cumulative last stone draw statistics are used to break ties.

The lowest-seeded winner in the qualification round will play Edin with the other winner to meet De Cruz.

"Definitely not afraid of it if that's the route we've got to go," Koe said after his morning win. "If you can get in those games and play well and get on a roll, you've got as good a chance as anybody."

Medal games will be played Sunday.

Koe opened with a deuce against De Cruz and scored five when Switzerland's final stone picked in the second end.

"That was pretty much ball game," said Canada lead Ben Hebert. "Hey, you need breaks. We haven't had a lot of breaks this week to be honest with you. So I'm thrilled to get a couple."

The teams shook hands after the minimum six ends.

Van Dorp put in a good effort against the Calgary skip but Koe had hammer and a two-point lead entering the 10th. Koe made a takeout for the win.

China's Qiang Zou and Norway's Magnus Ramsfjell were 2-10 and South Korea's SooHyuk Kim finished last in the 13-team field at 1-11.

Canada hasn't missed the playoffs at this event since Jack MacDuff missed the four-team cut with a 2-7 mark at the 1976 playdowns in Duluth, Minn.

Canada has never missed the playoffs at both the men's and women's world championships in the same season.