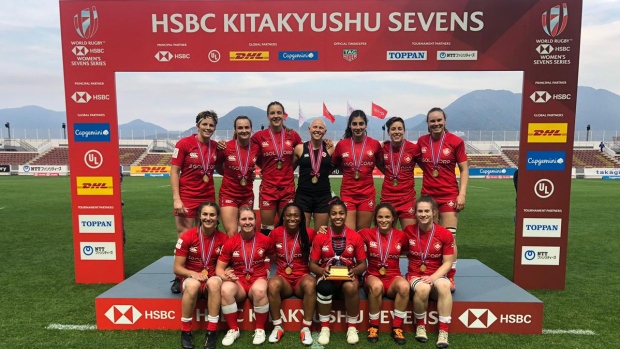 Canada went unbeaten through the tournament, dispatching Spain, China and Australia in pool play before edging Russia 17-14 in the Cup quarter-final and the U.S. 24-12 in a hard-hitting semifinal. It was a far cry from last year when the injury-ravaged Canadian women finished 11th in Japan in one of their worst performances on the circuit.

It's the fourth World Series victory for the Canadians, following wins in Amsterdam in 2015, Clermont, France, in 2016 and Sydney, Australia, in 2017.

The win moved Canada into second place in the HSBC World Rugby Women's Sevens Series standings — and a step closer to the Tokyo Olympics with the top four teams at the end of the season earning automatic qualification to the 2020 Games.

"It's huge, we know that (Olympic qualification) is what it is all about," said Landry, named player of the final. "That is our main goal this season and to get a Cup final on top of that is a good feeling."

Canada has 66 points, just six behind New Zealand in the overall standings. The Black Ferns, who had won the three previous stops on the circuit, finished a disappointing fifth in Japan after being upset by France in the quarterfinals.

The U.S., who finished third, are third overall (64 points), ahead of defending World Series champion Australia (56) and France (46).

"Our goal for this season was to come top four and take one of those Olympic qualifier spots so we took a massive step towards that this weekend and that is just what we are going to keep focusing on," said Canada coach John Tait. "We will look to perform better. I don't think we hit our stride fully in this tournament and that is encouraging as we won.

"If we can put our attack together with some of the defence we played I think that is a lot of positives to come."

Landry, the leading scorer on the circuit, paid tribute to England's spirit.

"Everything we threw at them they had an answer for ... they had a great weekend and gave us everything they had in that final," she said. "Sevens is such a hard game and in the last play of the last game it is a bit of a battle of the mind and we came out on top in that."

Canada now returns home to host a May 11-12 tournament in Langford, B.C., before wrapping up the season in Biarritz, France.

The lowest-scoring women's final on the circuit stretched well after the final whistle as play continued with England leading 5-0. After a penalty in the England end, the Canadian women worked the ball across the field until Landry, using one hand to collect an errant pass that hit the turf, saw an opening in the defence and darted through to score under the posts to cap off her 30th Series tournament.

Amy Wilson Hardy scored late in the first half, capping off a prolonged attack, to give England the lead.

The tournament made World Series history with neither New Zealand or Australia featuring in the semifinals.

In semifinal play, Canada handed the Americans their first loss of the weekend by virtue of two tries by Bianca Farella and singles by Julia Greenshields and Landry.

Landry, Charity Williams and Karen Paquin had tries in the quarterfinal win over Russia.

Landry and Paquin, in her first sevens event since the Rio Olympics, were named to the tournament Dream Team.

Canada won bronze at the 2016 Olympics.