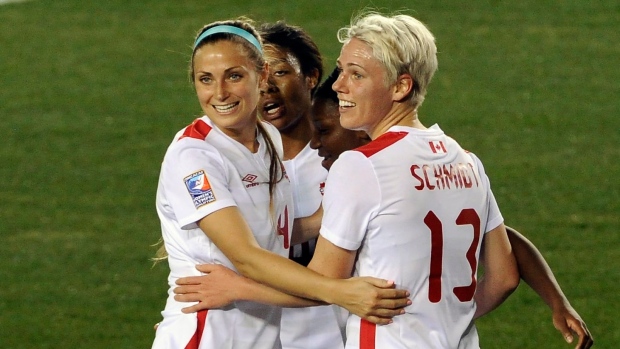 HOUSTON - In a lineup full of veteran talent, it was the youngsters that got Canada off on the right foot on its quest for a berth at the 2016 Olympic Games.

Twenty-year-old Ashley Lawrence had a hat trick and 16-year-old Deanne Rose had two goals as Canada's women's soccer team cruised to a 5-0 victory over Guyana in its first game of the CONCACAF women's Olympic qualifying tournament.

Canada featured a strong lineup that included superstar Christine Sinclair up front, Erin McLeod in goal and midfielder Desiree Scott earning her 100th cap for Canada. But the younger players proved that Canada's talent pool is getting deeper.

"We gave some new players some new opportunities and that was really exciting and to see (Lawrence) get a hat trick and Desi (Scott) get her 100th cap, it was a good night for us," said head coach John Herdman. "Three points and Trinidad up next and we're ready to roll."

Canada sits in first place in Group B tied with Trinidad and Tobago, who beat Guatemala 2-1 earlier in the evening. Canada holds the advantage due to a superior goal difference.

Those two teams will battle for first place on Sunday afternoon.

Sinclair, so often the scorer for Canada, was the provider of the corner kick on the first two goals and set up the last one of the night for Lawrence.

"It's incredible," said Sinclair of her younger teammates' contributions. "Obviously I always like to score goals but I'm one of those players that gets just as much joy when I see my teammates put it in the back of the net and any time you can get a 16-year-old scoring for your country it's pretty cool."

Making just her second start and playing in just her fourth game at the senior level, Rose provided the breakthrough after Guyana sat back in numbers, allowing Canada to attack in wave after wave.

In the 26th minute, Rose deflected a Sophie Schmidt header to finally break the deadlock.

The goal came on Canada's first corner kick of the night. The Canadians got their second in the same fashion just two minutes later.

Sinclair lofted in a high corner from the right side and Lawrence got her head to the ball. The ball just barely crossed the line before being cleared.

Rose gave Canada a third goal in the 39th minute when she used a burst of pace to get past a defender and then placed her shot into the low corner to the right of Guyana goalkeeper Chante Sandiford.

By comparison to Canada and its steady source of funding, Guyana spends very little time together as a team and is looking to make some first steps towards competing with other teams in the CONCACAF region.

The last time these two teams met was in a World Cup qualifier in 2010 with Canada running away with a 10-0 result.

"That was absolutely brilliant," said Guyana's head coach Mark Rodrigues. "We have so much to build on continuing on from this from where we've come in 2010 to now. We did all of this within the course of a year, we had less than three weeks with the team together."

"Can you just imagine if we had them for three months? So I'll keep smiling."

Lawrence got her last two goals within the first three minutes of the second half.

First, she headed in a cross that Rose delivered from the right in the 46th minute and then two minutes later, hit a strong right-footed shot from the middle of the penalty area after Sinclair put the ball right into her path.