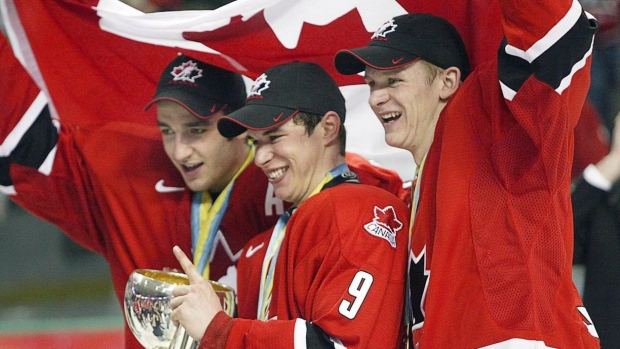 Sidney Crosby helped spark the golden age of Canadian junior hockey. In 2005, the Pittsburgh Penguins captain and his teammates ended a seven-year gold-medal drought at the world junior championship, which began a stretch of five straight titles.

"That sets the standard pretty high," Crosby said. "It's pretty tough to do that. It's what we try for every year, it's what we expect."

Lately, the results haven't been there. Canada has two silvers and one bronze to show for the past five tournaments, including two at home.

Connor McDavid was 12 the last time Canada won gold at the junior level, and hockey's "Next One" is tired of all the losing.

"I know people are starting to doubt Canada and they don't really believe anymore," McDavid said. "It's annoying a little bit. You see how past people did and how past teams did and how great they were and everything like that. People just don't expect that out of us anymore.

"They expect us to lose. That's just not how it should be for Canada."

McDavid and his current teammates are out to change all that. The tournament is back in Canada in Montreal and Toronto, and the host nation has an older team and is justifiably favoured to win gold.

The past, defenceman Darnell Nurse insists, isn't on his mind or those of his teammates. But Canada's recent past defines its present, and it's not pretty.

To Hockey Canada director of player personnel Ryan Jankowski, the past two years weren't good enough, but the previous five years, which included two gold medals in 2008 and 2009 — could've gone either way. Jankowski pointed out how Canada needed a shootout to beat the U.S. and overtime to beat Sweden and Russia to make it five.

"We got the bounces for three straight years, we didn't get the bounces for two, and then the last two we haven't been as good as we should be," Jankowski said. "It is frustrating, but it's also how tight international hockey is now."

Parity is at the core of Canada's gold medal drought. It feels like an eternity since a run of nine golds in 13 years from 1985 through 1997.

"There's so much parity and I think it's a good thing for hockey, obviously," said Philadelphia Flyers winger Wayne Simmonds, who was on the 2008 champion Canadian team. "You're getting great players coming from every country. I think it's huge for the game. It's building it up, it's making it more popular and it's just spreading the game worldwide."

Having young talent around the world add up to gold medals is great for junior hockey. Russia won with Evgeny Kuznetsov in 2011, Sweden with Filip Forsberg in 2012, the United States with Seth Jones in 2013 and Finland with Teuvo Teravainen in 2014.

"The last time I remember was Eberle, Tavares and those guys when they were unbelievable," Virtanen said. "That kind of brings back good memories in my family, and we were pretty happy when Canada won gold."

The past handful of teams aren't remembered as anything special, even though they had plenty of star players. Nathan MacKinnon, the No. 1 NHL pick in 2013, knows the down side of parity in international hockey.

"It's good and bad. You always want hockey to be as successful as it can be worldwide," said MacKinnon, who was on the 2013 team that finished off the medal table. "But being a homer, you hate to lose and I hated losing there. I think it's only a matter time before we kind of get that back.

"I don't know if we have to adjust and kind of play differently — maybe we're playing a little bit too old-school, I'm not really sure."

MacKinnon expects coach Benoit Groulx to do a good job with this year's team, which is headlined by McDavid, Nurse, 2014 No. 2 pick Sam Reinhart and New York Rangers right-winger Anthony Duclair.

The online sportsbook Bodog has installed Canada as the 3-to-2 favourite to win the gold medal. And while Nurse said of the pressure of playing at home that "at the end of the day, it's just hockey," history shows it adds a different element.

Pittsburgh Penguins goaltender Marc-Andre Fleury was part of the 2003 team that lost in the gold-medal game to Russia in Halifax, N.S. Fleury loved his time playing for Canada at that tournament but understands there's always more intense pressure on home ice.

"The guys know it, and they all want to win," Fleury said. "You know there's people outside (who) expect you to win. It's not like you don't put it on yourself to win. I think all the guys are accountable to get it done."

One of the tough parts of international hockey, as Crosby and MacKinnon pointed out, is that it's a one-and-done circumstance come the quarter-finals.

"Anything can happen," Crosby said. "It's not easy."

It won't be easy for McDavid's Canadian team to get the job done either, but the 17-year-old embraces the opportunity to end the country's gold-medal drought.

"With it being on our soil and with the home crowd behind us and stuff like that, I don't see any reason why this can't be the year for Canada," McDavid said. "It's our game, hockey's our game and it's our pride, it's our joy and it's our job to put the belief back into Canadians."