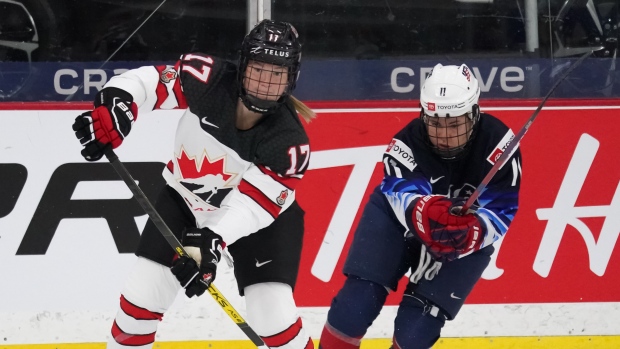 The Americans have had a well-documented rise to the top of women’s hockey.

With five straight gold medals at the world championships, the U.S. is also the reigning Olympic champion after beating Canada in a gold-medal shootout in PyeongChang.

In their first matchup at the worlds last Thursday in Calgary, Canada dominated the Americans with a 5-1 victory to finish undefeated in round-robin play and made easy work of Germany and Switzerland on their way to the finals.

Does that mean the balance of power is starting to shift?

We’ll find out for sure Tuesday night as Canada battles the U.S. for gold.

Watch the showdown LIVE on TSN3, TSN4, TSN.ca, the TSN App and on TSN Direct at 7pm et/4pm pt.

Canada hasn’t won a world title since 2012 and have only won the tournament twice since 2007. Their run of winning four consecutive Olympic gold medals ended in 2018, effectively passing the crown as the best in women’s hockey to the Americans.

Canada and the United States have faced off 14 times since the 2018 Olympics, and it has been a mixed bag of results.

In November 2018, Canada dropped both a preliminary match and the gold-medal game to the U.S. at the 4 Nations Cup in Saskatoon. The Americans have won the tournament four years in a row.

Hockey Canada and USA Hockey introduced the Rivalry Series between the two countries in 2019, where they face off outside of major tournaments in locales across North America.

During the inaugural three-game series in February 2019, Canada dropped the first game 1-0 in London, Ont., before rebounding to take the next two games 4-3 in Toronto and 2-0 in Detroit.

In their only meeting at the 2019 worlds, the U.S. beat Canada 3-2 in the preliminary round. The Americans would go on to win their fifth straight gold medal with a controversial victory over Finland, while the Canadians settled for a disappointing bronze.

The Rivalry Series returned in November 2019 in Pennsylvania, where Canada took both games over the U.S. 4-3 and 2-0.

However, the most recent five-game series spread across December 2019 and February 2020 was heavily in favour of the Americans. The U.S went 4-1 against Canada, with the Canadians’ only win coming in overtime 3-2.

Before last week, the last time Canada beat the U.S. at the worlds was during the preliminary round in 2013 with 3-2 shootout win. The U.S. would get revenge later in the tournament, claiming gold 3-2 over Canada, which kick-started their current run of five straight golds.

And then there was five days ago, where Canada completely controlled play from puck drop to the final buzzer.

The U.S. had not allowed a goal through their first three games at the Worlds but conceded early and often to Canada, who cruised to the win despite missing captain Marie-Philip Poulin because of an injury sustained earlier in the tournament.

Jamie Lee Rattray scored two goals in the second period just minutes apart and Sarah Nurse added one soon after to make things 5-0 for Canada through two periods. Lee Stecklein got one back for the Americans in the third period, but the damage had been done and Canada seemed more than happy to let the clock run out.

Sure, the result was promising. But Tuesday’s is the only one anyone is going to remember.

Despite much of the results in favour of the U.S., matchups between the Canadians and Americans never lack excitement.

This time around, with the U.S. and Canada having seven and eight players respectively making their worlds debuts, a new chapter in the Canada-U.S. women’s hockey rivalry has begun.