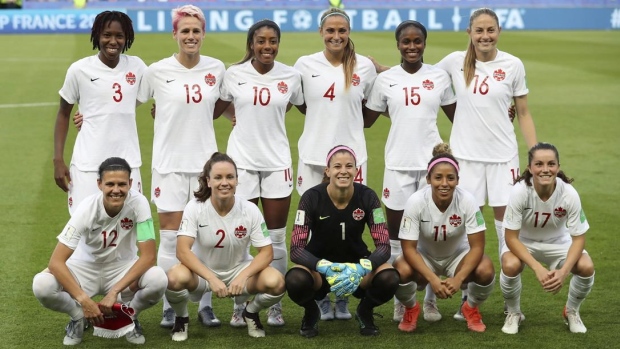 But both times, the seventh-ranked Canadians responded the next time out — tying Japan 0-0 in a closed-door game and blanking New Zealand 3-0.

"Even though I will never be comfortable ... losing 4-0, like never. No matter who we put on the pitch, that shouldn't be happening," Canada coach Kenneth Heiner-Moller said from his native Denmark. "But I saw some of the players I hadn't seen in a while on the pitch playing for Canada. That was a great learning and insight into who is where, who is ready, who needs some more time.

Still, the 4-0 losses marked the most goals conceded by the Canadian women since the infamous 4-3 extra-time defeat to the U.S. in the 2012 Olympic semifinal — a stretch of more than 100 matches.

Heiner-Moller fielded a more experimental lineup against Brazil in Canada's opener Nov. 7 at the China Four Nations Tournament in Yongchuan. Goalkeeper Sabrina D'Angelo, Lindsay Agnew, Shannon Woeller, Gabrielle Carle and Adriana Leon got their first starts of the year, with Deanne Rose given her second start.

Olivia Smith came off the bench, becoming Canada's youngest women's senior player at 15 years three months. Maegan Kelly made her first appearances of the year while Nichelle Prince returned to action from injury.

Heiner-Moller liked what he saw in Smith, who came off the bench in the 83rd and 86th minute, respectively, in China.

"She can do so much already ... She can already perform at a level that's beyond what you could think a kid her age could actually do," he said. "So it's about taking very very good care of her, but also pushing her. In the world of sports, you can find so many very very good players at the age of 14, 15 that didn't make it because either they took it too lightly or had bad advice or whatever."

"But I can tell you she wasn't given any internationals. In this camp she earned both of them. And if you can earn them by the time you're 15, you've got hopefully a pretty good future ahead of you."

The heavy defeats to No. 10 Japan (on Oct. 6 on a separate trip) and No. 11 Brazil were quite different, according to the coach.

Heiner-Moller said he was "furious" after the Japan defeat in Canada's first outing since its round-of-16 exit in June at the World Cup in France.

"That was an attitude thing," he said. "It was World Cup blues. That was unacceptable. We can never show up and just expect things to happen. We need to fight for every single inch of the pitch and believe in the concepts and all that stuff."

The Nov. 7 loss to Brazil was caused by untimely mistakes, the kind the Canadians rarely make, according to Heiner-Moller.

"The performance was decent. It wasn't good but it was decent. We made some awful errors in the middle of the pitch, just passing it to a Brazilian who went down and scored."

A handling error by D'Angelo contributed to another goal. At the other end, Canada hit the crossbar.

The Canadians, with Heiner-Moller fielding a more traditional lineup, raised their game against No. 23 New Zealand, breaking down the Kiwis' 5-4-1 formation.

The win over New Zealand snapped a four-game losing streak that included World Cup losses to Sweden (1-0) and the Netherlands (2-1). Canada finishes the year at 8-4-3.

Heiner-Moller will be in England on Sunday to watch Janine Beckie and Manchester City host Leon and West Ham United in Barclays FA Women's Super League play. On Saturday, he will monitor Kadeisha Buchanan and Lyon against Lawrence and Jordyn Huitema of Paris Saint-Germain in French league play.

"A clash of the Canadians around the world," said Heiner-Moller.

Canada's next challenge is the CONCACAF Women's Olympic Qualifying Tournament, which runs Jan. 28 to Feb. 9 in Texas and California.

Canada, the second-highest ranked team in CONCACAF, will play in Group B alongside No. 27 Mexico, No. 51 Jamaica and No. 134 St. Kitts & Nevis in Edinburg, Texas.

The top two in each group will cross-over and meet in the semifinals Feb. 7 at Dignity Health Sports Park, home of the Los Angeles Galaxy, with the winners qualifying for the 2020 Olympics in Japan. The championship game Feb. 9 will also be in Carson, Calif.