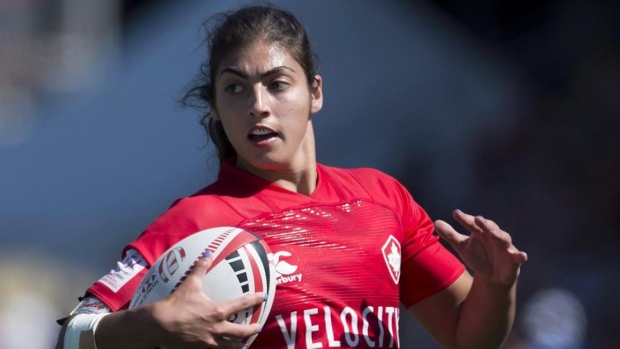 DUBAI, United Arab Emirates — Bianca Farella scored two early tries and Canada staved off a Russian rally in the second half to win its opening match 24-19 at the Dubai Sevens on Thursday.

The Canadian men were not so fortunate, succumbing to a late try in a 19-12 loss to Samoa.

Captain Ghislaine Landry and Charity Williams also scored tries for Canada, which led 19-0 at the half. Landry, the all-time points leader on the circuit, added two conversions.

The Canadian women, who finished third overall last season and were runners-up in Dubai, play Brazil and the U.S. on Friday. The U.S. downed Brazil 29-7 in the other Pool A match Thursday.

Co-captain Nathan Hirayama gave the Canadian men the lead with a second-minute try and conversion in the tournament's opening game at the Sevens Stadium. The teams traded tries, with Josiah Morra scoring for Canada, and went into the break tied at 12-12.

After surviving a man in the sin-bin, Samoa patiently built an attack and Elisapeta Alofipo broke through the Canadian defence with the winning try in the 13th minute.

The win came as Samoa dealt with a deadly outbreak of measles back home.

New Zealand defeated Wales 36-7 in the other Pool C match. Canada plays both teams on Friday.

Henry Paul took over for the final two tournaments with the men tying for seventh in London, matching their best finish of the season, and placing ninth in London. Paul has since taken over the team full-time, leading it to Olympic qualification and a silver medal at the Pan American Games.

Dubai is the first of six joint men's and women's events this season, which features an expanded eight-stop women's circuit.