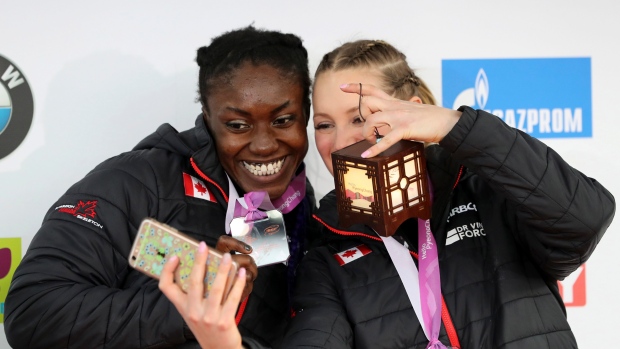 Cynthia Appiah says the moment she first considered bobsled an option was the 2010 Vancouver Olympics.

The 31-year-old from Toronto recalls seeing Canada's Shelley-Ann Brown, who is Black, flying down the Whistler track with partner Helen Upperton en route to a silver medal in the two-woman event.

"I thought, oh wait, I see myself in her, this is something that I can definitely do," Appiah said in a phone interview from Winterberg, Germany. "Or at least it's piqued my interest enough to want to try it out.

"I don't know if I would be where I'm at right now if I hadn't seen someone like me in Shelly-Anne Brown at the Vancouver Winter Games."

As a Black woman in a predominantly white sport, and with the Winter Olympics being significantly less diverse than their Summer counterpart, representation matters immensely to Appiah.

"The campaign literally means glory from anywhere, it doesn't matter what part of Canada that you're from, your socioeconomic status, your race," Appiah said. "My passion and my motivation going into these Games is to really break down these stereotypes, and break down the mould of what typical winter athlete can look like, and how successful we can be."

Appiah, who has four medals on the Women's Monobob World Series this season, jumped in a bobsled for the first time a year after the Vancouver Games after bobsled scouts spotted her at York University. The former track and field athlete had just competed at the Canadian university championships in that sport, and was home for all of 30 minutes to pack winter gear before driving to Lake Placid, N.Y., for a bobsled pilot school.

On her run down as a pilot, she thought: "What have I got myself into? Why am I here?"

By the end of the second run, she was hooked.

While bobsled is a predominantly white sport, Black pilots are even scarcer, a disparity four-time world champion Elana Meyers Taylor of the U.S. has also been vocal about. In an first-person piece she wrote for the Canadian Olympic Committee, Appiah said the ignorance around Black pilots is similar that around Black quarterbacks, that Black athletes "lack intelligence on the field," she wrote.

Meyers Taylor, who is biracial, has said one of the biggest bobsled manufacturers in the world refuses to sell to Black drivers.

"We are lucky to have a rich Olympic history in Canada because we can look up to so many great Olympians who achieved their dreams through bravery or resilience," Appiah said. "But it's important that people can see themselves in their heroes. I hope my teammates and I can be the same source of inspiration for people watching the Games no matter their background, race or religion."

The Beijing Games will open under the cloud of COVID-19 as the Omicron variant exploded like a grass fire around the globe. Two years into the pandemic, and reeling from yet another wave, David Shoemaker hopes Olympic athletes can inspire Canadians.

"At its core, there's a duality of this 'Glory From Anywhere' campaign," said Shoemaker, the CEO of the Canadian Olympic Committee. "On the one hand, it really shows that no matter where you're from, or who you are, you can be a Canadian Olympian. . . in Cynthia's case, using this platform that she now has to inspire Black youth in Olympic sport. It features Max Parrot, who's now a cancer survivor, trying to repeat as an Olympic medallist.

"And then the duality is that you don't have to be an Olympian to be Olympic, in whatever you do, wherever you're from, you can achieve glory. That's the message we’re trying to send."

The campaign was developed in collaboration with Toronto-based creative agency Camp Jefferson and K-72, an agency based in Montreal.

The Olympics open on Feb. 4. They're the most gender-balanced Winter Games in history, with more female athletes (45 per cent) and women's events than any previous Games.