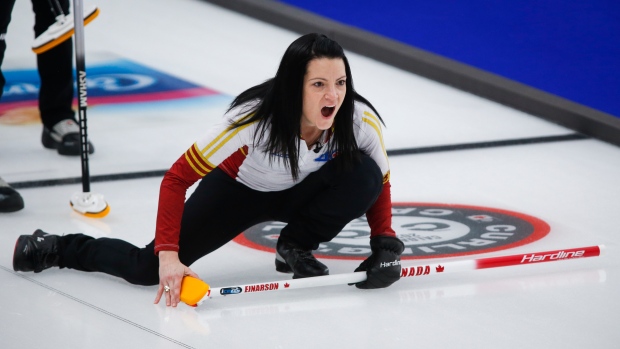 CALGARY — Reigning Canadian women's champion Kerri Einarson is off to a 3-0 start at the Grand Slam of Curling's Humpty's Champions Cup.

The Manitoba rink beat Japan's Satsuki Fujisawa 8-2 in the second draw on Friday.

After eight draws at the event, Einarson and Tracy Fleury were the lone women's rink at 3-0.

Manitoba's edged Manitoba's Jennifer Jones 7-6 on Friday morning, then followed up with a 10-7 win over Sweden's Anna Hasselborg.

On the men's side, Bruce Mouat of Scotland was the lone undefeated skip at 3-0, while Brad Gushue of Newfoundland and Labrador was 2-0.

Canadian champ Brendan Bottcher of Alberta was 2-1 after an 8-2 loss to Alberta's Kevin Koe, also 2-1.

The event is the first of two Grand Slams at WinSport's Markin MacPhail Centre, which already has hosted the Canadian men's, women's and mixed doubles championships as well as the men's world championship.

The women's world championship, with Einarson representing Canada, will close the Calgary curling bubble next month.