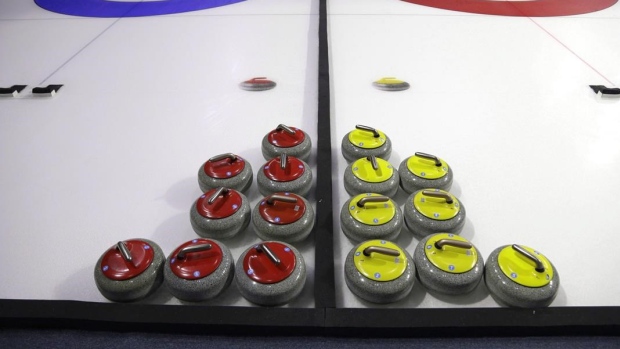 Canada's curling clubs run the gamut from full steam ahead to delayed openings to total shutdowns during the COVID-19 pandemic.

Clubs up and running are bracing for the economic impact of reduced registration, bar sales and facility rentals and increased cleaning costs.

Curling Canada provided return-to-play guidelines this summer. What the recreational game looks like depends on health regulations and the level of infection in each province or territory, and rules instituted by the clubs themselves.

Curlers are adapting to game modifications to reduce the risk of contagion, including one sweeper on a delivered stone instead of two in many clubs.

But Chatham, Exeter and Windsor's Roseland are among Ontario clubs not opening this winter.

About 42 per cent of the Chatham Curling Club's membership indicated this summer they wouldn't curl this season, president Deanna Bullard said.

"It was the well-being and safety of our curling members that was first and foremost in our minds, because we have an older membership," Bullard told The Canadian Press.

"It just became very apparent that we shouldn't open."

Chatham's curling club has a reserve fund and owns its building.

The club can financially absorb not operating this winter and would have lost money if it did, Bullard said.

"My club's been around since 1862, " she said. "We've been curling since before Canada. We've grown up with Canada.

"I want that tradition to survive."

Edmonton's Shamrock Curling Club is open, but will likely operate at a loss this winter even at 90 per cent membership renewal, according to its GM.

"We're not sure how comfortable people are going to be using a lounge," Chris McTavish said.

"Curling clubs, the bar in a lot of ways is our lifeline and what keeps us afloat. When we lose that, we're in tough.

"I haven't received any requests for rental ice. We have a lot of big groups that come in and use our facility on the weekends with 20, 25, 30 teams. We're going to be seeing significant losses both operationally in our rentals, and in our lounge sales."

The Kamloops Curling Club, meanwhile, felt closing this season made the most sense from a financial standpoint.

Club president Ron MacDonald, in a letter posted on the club's website, said if the club tried to operate this year "we would surely use up our contingency fund and if we were forced to close during the season, we would be in serious trouble financially.

"It could cause the club to permanently close."

The Town of Mount Royal Curling Club opened, but shut down Wednesday until further notice because the Montreal facility is in one of the Quebec's COVID-19 "red zones."

"Before this second wave hit, it looked like 70 per cent were going to open on time or maybe slightly later," said Curling Canada's director of curling club development Danny Lamoureux.

"It looks like all the curling clubs in red-zone designated areas by the Quebec government have to close even though they've got ice in and they're open."

A four-sheet club in Gananoque, Ont., a three-sheeter in Maxville, Ont., and the Gladstone Curling Club in Fredericton are among facilities delaying the start of their seasons until January.

In anticipation of reduced participation and to save on costs, the Thistle St. Andrews in Saint John, N.B., will maintain and operate five of its eight sheets of curling ice.

Penticton Curling Club general manager Chris Jones polled 460 members in August to determine if it was worth opening.

An uptick in registrations by snowbirds not heading to the southern United States helped the club's membership numbers.

Jones was confident he'd have at least 420 registered when the club opened this week.

"The biggest difference is all the new people that are getting into curling because they're bored," Jones said. "I've got I've got a ton of snowbirds. I've got a ton of newbies. They can't do anything else. They thought 'let's curl.'

"I'll bet you I'm going to be in the neighbourhood of 50 to 70 people new people in the club this year."

How much time they'll spend socializing before and after draws is a big question mark for Jones. The lounge can operate at only 50 per cent capacity and must close at 10 p.m.

"We hope we have good bar sales, but that's the wild-card right now," he said.

Jones estimates he's spent an extra $3,000 on cleaning equipment and supplies, including a fogging machine to sanitize carpets and seating daily.

"We told them the key thing to this is as a club's board of directors and staff, you need to sit down and understand the risks of opening. Can you afford to open?" he asked.

"We told them in all of the workshops that we did there's no shame in deciding to close down. You did what was right for the survival of your club."

This report by The Canadian Press was first published Oct. 8, 2020.