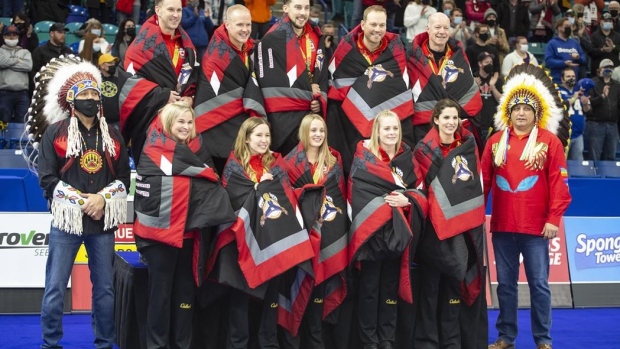 SASKATOON — With Canada's Olympic curling trials now complete, the focus for many teams will soon shift to the upcoming quadrennial even though there's still half a season left to play.

Teams skipped by Jennifer Jones and Brad Gushue will represent Canada at February's Winter Games after close victories Sunday. The Beijing door may now be closed for Canada's other four-player teams, but the 2026 Milan Games already beckon on the distant horizon.

For many athletes looking to make another four-year push, it may soon be time to think about lineup changes and team adjustments.

Call it the unofficial arrival of the curling free agency period.

"I think it has already started," said Gushue. "I haven't heard anything but I know from in the past, there are certain players out here that are overly anxious and have probably already started to have conversations."

Since many elite curlers also participate in mixed doubles, next month's trials in that discipline will demand their immediate attention.

The Grand Slam schedule continues early in the New Year and provincial and national championships are fast approaching. However, the Olympics are the main carrot in the sport and that makes it never too early to start looking ahead.

"If it was like four years ago, you're going to know most of the (new) teams before the Brier (in March)," Gushue said. "I don't love that to be quite honest. I'd love to see it after the Brier, let everybody play and then figure it out.

"It's a lot of talking behind backs and all that stuff that happens. I've been fortunate enough to avoid (it) for the last couple cycles because we've had the same team but I would imagine it's starting."

Unlike other sports where agents, general managers and team brass are in the mix to determine future plans, curlers are essentially independent contractors.

Friendships and teammate relationships can sometimes be fractured as individuals pursue Olympic hardware.

"It's a challenging thing to manage as a player because we're all friends out here and get along," Gushue said. "You don't want to hurt anybody but you also want to give yourself the best position to get to the Olympics or win Briers or whatever.

"It's a challenging thing to navigate."

Usually team changes come in the off-season or after the national and world playdowns, but that timeline can change in Olympic seasons.

"The pressure starts immediately after these trials are over for all the other teams who are saying, 'OK we've got to get back to the trials for the next Olympic cycle,' said curling broadcaster Mike Harris, who won silver at the 1998 Nagano Olympics.

"So that is really what has changed in the game. This is the biggest prize in the sport right now. That's where the pressure is."

"Some teams won't change but I can guarantee you there will be significant changes in the curling world after the trials," said Team Bottcher vice Darren Moulding. "Absolutely 100 per cent guaranteed."

Brent Laing, who plays lead on Team Epping, joked that the chatter may have started last Friday on trials cutdown day ahead of the playoffs.

"There's lots of guys that are figuring, 'Hey, who's going where?,'" he said. "Where are the sponsorship dollars, what are the rules going to be and who's got the most (ranking) points?

"All those things that go into putting together hopefully an Olympic-calibre team."

One of the more notable cases of a player making in-season plans with an eye to the following quadrennial came in 2014.

Kevin Koe won the Brier that season and details about his plans for a new lineup got out shortly thereafter. His 2013-14 lineup finished off the campaign before three new players joined the veteran skip the following season.

Koe's plan worked. While his Brier-winning team settled for a fourth-place showing at the 2014 worlds, his new team would win the 2017 trials and represented Canada at the Pyeongchang Olympics.

While that's certainly the exception and not the norm, it shows that the sport's best are usually looking well into the future.

"There's no qualms about trying to just find the best team for you to play on as an individual," Harris said.

This report by The Canadian Press was first published Nov. 29, 2021.