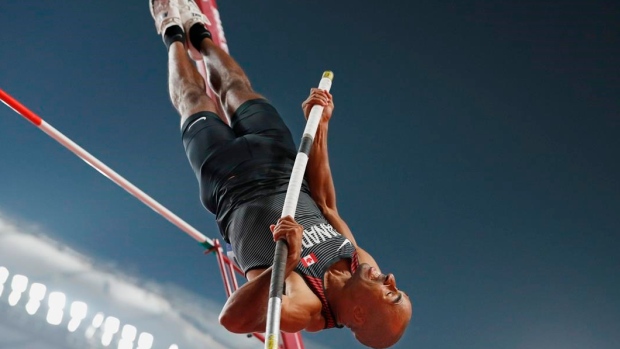 DOHA, Qatar — Canada's Damian Warner is back on the podium for a third time at the world track and field championships after a dramatic finishing day of the decathlon.

The native of London, Ont., won bronze on Thursday, just hours after leader and world-record holder Kevin Mayer of France withdrew in tears in the eighth event, the pole vault, with injuries to his hamstring and Achilles tendon.

Warner, who took silver in 2015 and bronze in 2013, was leading after the first day and was second when Mayer pulled out. But the 2016 Rio Olympic bronze medallist was 15th in the pole vault, fifth in the javelin and ninth in the event-ending 1,500 metres, falling back after racing into the lead at 400 metres.

"It helps that it's another medal for Canada, but it is a little bit disappointing," said Warner. "These last six weeks leading up to this decathlon (have) been a bit rough for many reasons, but I'm happy that the season's over and I can regroup and get ready for the big push next year (ahead of the 2020 Tokyo Olympics)."

Toronto's Pierce LePage, who led after the pole vault, was fifth with 8,445 points in his first world championship. He was 14th in the javelin and 15th in the 1,500.

"It went better than Day 1, so I'm happy about that," LePage said. "Obviously a bit frustrated because of so many things that could've gone much better, but it's my first world championships, so what can you do. My experience with this decathlon showed a lot about my perseverance and character."

Canada now has five medals — one silver and four bronze — at the worlds with three days to go.

Toronto's Gabriela DeBues-Stafford was second overall in the women's 1,500-metre semifinals with a time of 4 minutes 1.04 seconds, while Tim Nedow of Brockville, Ont., was 10th overall in men's shot put heats with a throw of 20.94 metres.

"It’s exciting," said DeBues-Stafford. "I was a bit nervous coming into this because I know I belong in the final, but you never know what can happen."

"It was really my only option because the same throw wasn't going to cut it," said Nedow. "We have such a strong group of guys, it's so fun. I'm so proud to be part of this historic shot put final. It's going to be something crazy."

Toronto's Brittany Crew finished eighth in the women's shot put final with a top throw of 18.55 metres. She was sixth at the last worlds in 2017.

"I tried my absolute best so I can't be upset or disappointed," Crew said. "It just didn’t happen for me today but it's OK. I'm super proud of myself. It's going to be a big fight in Tokyo."

This report by The Canadian Press was first published on Oct. 3, 2019.