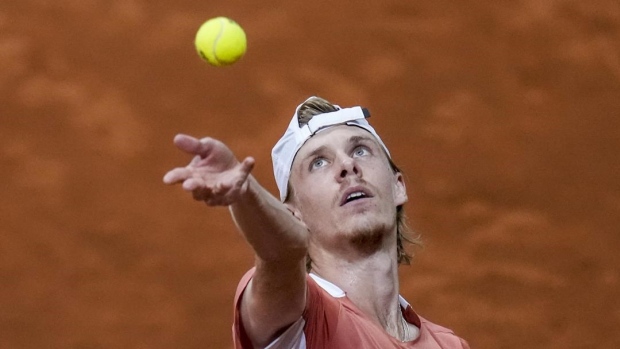 PARIS — The new coaching voice in Denis Shapovalov’s ear is a fellow Canadian he’s known since he was a young boy, who hails from the same hometown.

Peter Polansky is also a coaching newbie, who still considers himself an active player.

So if Shapovalov, now 23, is an outside-the-box type of tennis player, his decision to make 33-year-old Polansky of Richmond Hill, Ont., his new full-time coach is appropriately out of the box.

“He was meant to do around 10-15 weeks with me, just kind of part-time. Jamie (Delgado) was supposed to be the main guy. But I went through a trial period with Jamie and then I had a couple of weeks with Peter — and everything just was working really well with Peter,” said Shapovalov, who faces a tough opponent Tuesday in his French Open first round in rising 19-year-old Dane Holger Rune.

Hiring Delgado to start the 2022 season — for better or worse — was the first decision Shapovalov made as he takes ownership of his career.

“It's not that things didn't click, It wasn't something that he was doing wrong, necessarily," Shapovalov said.

"I think he's a great coach. I think he's an amazing guy. And we got along really well. But just something was missing. And it's kind of indescribable,”

“Sometimes it's just a little bit of intuition, a little bit of feeling. My gut was just telling me to go and go full-time with Peter just because I feel so comfortable. I can feel how much I'm improving when he's on the court with me, so it was really tough for me not to take that opportunity.”

The arrangement with Delgado, Shapovalov said, was a trial run this spring through Miami.

The British coach wasn’t scheduled to be on board during the clay-court season, other than perhaps a few weeks, as Shapovalov evaluated turning the trial run into a permanent gig.

Before the Rome tournament earlier this month, Shapovalov said he called Delgado to say he was proceeding with Polansky alone.

Also along for the clay is Adriano Fuorivia, who is Shapovalov’s longtime junior coach and a man he considers family.

For Polansky, a former top junior who has been grinding it out at the various levels of pro tennis for 15 years, but who never quite broke into the top 100, the opportunity came at the right time.

A heart arrhythmia he's managed his entire career worsened, and resulted in on-court episodes that forced him to retire mid-match on several occasions over the last six months.

A few months ago, Polansky had a procedure to address the issue and was planning to take a break from tennis to recover. So the timing was serendipitous.

Polansky worked with Shapovalov for a few weeks during the off-season at the IMG Academy in Bradenton, Fla., at Shapovalov’s request. Polansky was an associate coach under Delgado at Indian Wells.

Polansky quickly sensed the direction things were headed after several good weeks working with Shapovalov before the Madrid and Rome tournaments.

“Honestly, I wasn't really sure what to expect going into this," Polansky said. "I never really coached before. Having travelled alone for so many years, I kind of learned what I would have wanted if I had someone around me to help me or look out for me.

“Maybe it's my attention to detail. I think I've got his best interests at heart. And he sees that too. It's kind of tough when you're at the top. Everyone kind of wants a piece of the pie.”

Despite the 10-year age difference, Polansky and Shapovalov go way back.

Both trained at the old Player’s Edge Academy at York University when Polansky was a top junior and Shapovalov was just starting.

A few years later, when Polansky already was out on the pro circuit, they got to know each other a little more.

In the summer of 2017, the two met on court for the first time in back-to-back tournaments.

Shapovalov won their final at a Challenger in Gatineau, Que. The next week, Polansky returned the favour in the semifinal of another Challenger in Granby, Que.

That was the last time Polansky would be ahead of Shapovalov in the ATP Tour rankings.

“The biggest thing is I think he's one of the smartest guys I know and I think he's got a great eye for the game as well,” Shapovalov said.

“Even the matches that I played against him — whether he executed or not — I could feel him figuring my game out and putting me in situations that I didn't like, and using that to his advantage.”

Two weeks after their Granby showdown, an 18-year-old Shapovalov upset Juan Martin del Potro and Rafael Nadal on his way to the semifinals of Montreal's Rogers Cup.

Right after that, he qualified at the U.S. Open and advanced to the fourth round.

Suddenly he was in the top 50, with a bullet.

“He shot up way past my level really quickly,” Polansky said.

Shapovalov had a disappointing run through Indian Wells and Miami on the hard courts in March, winning just one total match.

He began the clay-court season slowly. But a run to the quarterfinals in Rome included a win over Nadal.

It was a somewhat physically compromised Nadal, to be sure.

But Shapovalov had a match point against the 13-time French Open champion the last time they played in Rome, too.

The Canadian hasn’t played the French Open since the fall edition in 2020.

He withdrew in 2021 because of a shoulder injury that slowed him on and off for much of the season.

But Polansky knows what his charge can do.

He’s committed to making sure Shapovalov’s minimum base level is higher — the way it is for the very best players in the world.

“In my opinion, when he's on and he's in the zone, his highest level is … scary. Top-three, potentially, it’s that good," Polansky said.

"I've seen him play Novak Djokovic at ATP Cup twice, and both times he had good chances to win those matches and the level was really high,”

“So for someone like Denis, if you can bring that level a bit more consistently, and have fewer ups and downs, he’ll gain that confidence and can build on it.”