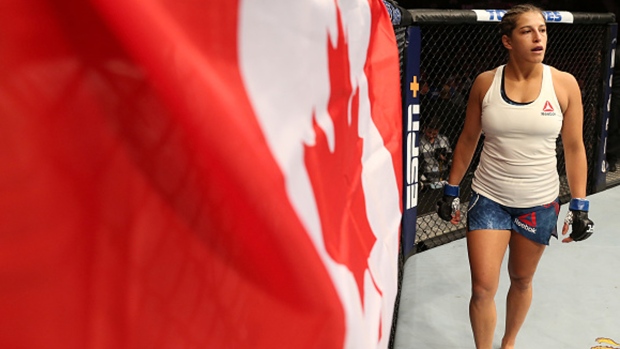 Last July, she turned heads in going the distance in a loss — her first as a pro — to hard-hitting Cris Cyborg, a former UFC, Strikeforce and Invicta FC title-holder. On Saturday in the main event of UFC 250 in Las Vegas, Spencer faces another icon in bantamweight and featherweight champion Amanda (Lioness) Nunes.

The American-based Brazilian is one of only four UFC fighters to rule two weight classes at the same time (joining Daniel Cormier, Conor McGregor and Henry Cejudo).

The "UFC 250 Countdown" show previewing the bout calls Nunes a "living legend," and "the greatest female fighter on the planet." Oddsmakers favour Nunes at around plus-600 (as they did Cyborg against Spencer), meaning you have to bet $600 to make $100.

Despite those odds, Spencer can't wait.

"I'm not blindly confident. I just know what I'm capable of," she added.

Spencer (8-1-0) is the first Canadian to challenge for a UFC crown since former welterweight champion Georges St-Pierre, in his final outing, dethroned middleweight title-holder Michael Bisping in November 2017.

Nunes (19-4-0) is putting her featherweight (145-pound) title on the line on the pay-per-view card, which will take place without spectators at the UFC Apex — the MMA organization's in-house production facility.

Former bantamweight champion Cody (No Love) Garbrandt (11-3-0) faces Raphael Assuncao (27-7-0) in the co-main event. Assuncao is ranked fifth among 135-pound contenders while Garbrandt is No. 9.

Born in Montreal, Spencer moved to the U.S. with her family when she was four. While she maintains Canadian ties, Florida has long been home with Orlando's Jungle MMA and Fitness her training base.

"I don't really think about the crowd too much during the fight but then immediately after it all kind of hit me," said Spencer, a former Invicta champion who walks to the cage draped in the Canadian flag. "And then watching the event after, it was really nice. It's really humbling to feel like a whole nation is kind of like riding behind me and really hoping for me to succeed.

"It feels really great to kind of reconnect with the Canadian roots since I've been living in Florida for so long. It's nice to feel that pride come through."

Spencer, along with her two older brothers, was four when her parents enrolled her in taekwondo classes. At 12, she transitioned to jiu-jitsu and today she holds black belts in both martial arts.

A shy kid, Spencer says martial arts helped build confidence as well as friendships. It's part of the reason she enjoys teaching kids at her gym, knowing she can might be able to make a difference in someone's life.

The 29-year-old Spencer, who heads her gym's "Little Gorillas" BJJ program, used to teach classes every day but cut it back to three times a week prior to the pandemic.

"It's not something that I necessarily had to do any more but it's so rewarding to show up and just get the reception and see the learning process happen," she said.

"It feels so small to us but it's such a big deal to the kids," she added. "It just really drives me to keep being the best coach I can be to them."

She scores instant Mom points in that she can teach Addie how to look after herself and help with her homework. Spencer earned a degree in math education at the University of Central Florida and, until recently, worked as an online algebra teacher at Florida Virtual School.

She has taken a leave of absence from math teaching recently to reduce her workload.

Coppinger, a welterweight, won his pro debut in February after going 3-0-0 as an amateur.

Spencer started her MMA career as an amateur in 2012, losing her debut before reeling off five straight wins. She then won her first seven fights as a pro prior to meeting Cyborg.

Cyborg attempted almost twice as many strikes as Spencer (234 to 115) and held a 122-38 edge in significant strikes landed en route to a unanimous 30-27 decision.

But Spencer got Cyborg's attention early, opening up her forehead with a left elbow, and took everything the Brazilian dished out.

"Thank you Felicia. I have my first cut," she said with a smile, pointing to the gash.

Spencer bounced back from the UFC 240 loss by stopping France's Zarah Fairn dos Santos via first-round TKO in February in Norfolk, Va. That performance earned her the title shot against Nunes as the UFC tries to expand the women's featherweight division.

Spencer took Zairn down after a clinch in the fence, ended in mount position and pounded away with strikes and elbows until the referee stepped in.

"I wanted to show a different side of me, a little bit more violent this time," she said in her post-fight interview. "I hope everyone was happy with that."

The five-foot-six Spencer normally walks around at 163 pounds but will have to weigh in at 145 pounds Friday.

"It's not a cut that kills me but I wouldn't want to cut any more than that — in a healthy way," she said.

She added the featherweight title in December 2018 when she dethroned Cyborg at UFC 232. Saturday marks her first title defence at 145 pounds.

The 32-year-old Nunes has won 10 straight since being stopped in the third round by Cat Zingano at UFC 178 in September 2014.

And she seemingly can do it all. Nunes needed just 51 seconds and 13 significant strkes to finish Cyborg — who had not lost since her pro debut in May 2005. She completed eight of 11 takedown attempts against de Randamie, a former elite kickboxer.

Spencer, meanwhile, has yet to be taken down in her three UFC fights. Largely due to the Cyborg fight, the Canadian has absorbed 6.27 significant strikes per minute, compared to 2.63 per minute for Nunes.

Nunes and Spencer were originally slated to meet May 9 in Sao Paulo. But the event was postponed when the Brazilian government turned the arena into a COVID-19 field hospital.

While the pandemic has limited her training group, Spencer says she is well-prepared — especially given the delay in staging the bout.

Cyborg has since moved to the Bellator promotion, dethroning featherweight champion Julia (The Jewel) Budd of Port Moody. B.C., in January.

This report by The Canadian Press was first published June 3, 2020.