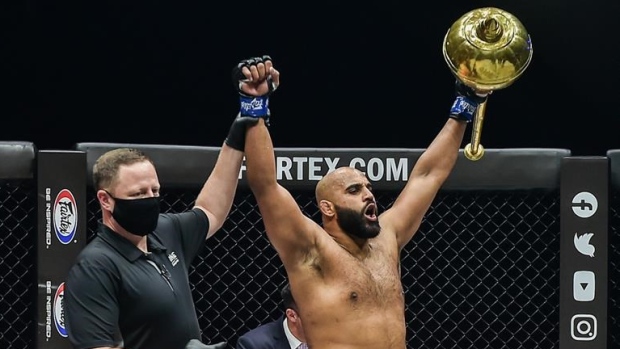 The pride of Indian mixed martial arts is back home after dethroning Brandon (The Truth) Vera in Singapore to win One Championship's heavyweight title.

And for Arjan Singh Bhullar, home is Richmond, B.C.

One Championship's spotlight shines mainly on the Asia market, however. So Bhullar's Indian bloodlines take centre stage when he fights under its banner.

It's the same for Bibiano Fernandes, who holds One Championship's bantamweight title. While born and raised in Brazil, the 135-pounder now makes his home in Vancouver — but is billed as Brazilian by the MMA promoter.

Make no mistake, the 35-year-old Bhullar is happy to call Canada home.

"Obviously I'm born and raised Canadian. I'm proud of who I am," he said. "I've represented the Maple Leaf proudly for many years on the world stage. My parents came here for a better future and opportunity. And I'm a product of that. And I'll always be thankful for Canada for that.

"But even when representing the Maple Leaf, you're representing your culture and your roots. And if you're able to do that, it's a great deal."

He was told by One Championship he couldn't fight under two flags — "and they wanted me to represent India."

Bhullar (11-1-0) had no issue with that, reasoning that Canada has already had UFC champions in Carlos Newton and Georges St-Pierre.

"There are gyms across the country. Fighters know they can make it (in Canada)," he said. "India doesn't have any of that. So if I do represent this, I can give them hope. I can give them 'Hey this is possible.' And any time you can do that for a people, I think it's a good thing."

Plus Bhullar, a father of two, has plenty of family back in India.

"They had a big old party back home, (after the fight)" said Bhullar, happy to provide a country ravaged by the pandemic something to celebrate.

The six-foot-one 241-pound Bhullar stopped Vera at 4:27 of the second round in the main event of One Championship Dangal, which aired last Saturday.

The Australian-born Schiavello is no stranger to hyperbole. His description of the Bhullar-Vera bout included references to blows he dubbed the "headache-maker," "cranium-cracker," the more mundane "good stiff jab to the schnoz" and a body shot that "tried to fold him in half like origami."

The fight actually took place April 29, meaning Bhullar — having signed a non-disclosure agreement — was back home and had finished out his quarantine before it aired.

Bhullar comes from an accomplished wrestling background, having won bronze at the 2007 Pan American Games in Rio de Janeiro and gold at the 2012 Commonwealth Games in India. Bhullar, named Canadian Wrestler of the Year in 2009, finished 13th at the 2012 Olympics in London.

He turned to mixed martial arts because he didn't want to give up competition when his wrestling career ended. His first pro MMA fight was in November 2014.

He went on to win three of four fights in the UFC but left when his contract ran out, turning down its offer to stay. Bhullar wanted to know what plans the promotion had for India.

"And they made it clear that India wasn't in their near-future plans," he said.

With offices in Singapore, Tokyo, Los Angeles, Shanghai, Milan, Beijing, Bangkok, Manila, Jakarta, and Bangalore, One Championship welcomed him with open arms, saying it wanted Bhullar to lead the way into the giant Indian market.

"You go where you're valued," said Bhullar.

"They allowed me to build my brand," he added. "They like superheroes and that's what I am to my people."

Bhullar almost didn't make it to the title fight, which was staged in an empty arena.

Bhullar, who had COVID-19 before starting his training camp some 2 1/2 months ahead of the bout, passed all his tests for the virus except for one while in Singapore. He was told the bout was off pending the result of a another test, which finally cleared him two hours before the fight.

"I thank the company for getting it done and waiting for us," he said of One Championship.

As for having COVID, Bhullar said he had "a few rough days definitely," adding it took a week to 10 days after to shake the fatigue that came with it.

"That was difficult and very weird," he said.

The virus also went through his whole family, including his wife, his mother and several cousins. All have since recovered.

"I just count our blessings," he said. "There's a lot of folks in India right now dealing with this. It's a completely different deal on the ground out there."

Bhullar was the aggressor in the Vera fight.

"I think my boxing's way better than his," Bhullar said in the buildup to the bout.

He backed up the words, outstriking the 43-year-old Vera (16-9-0 with one no contest) and taking him down.

"I think people are starting to realize 'Hey, this guy's the real deal. He's a world champion for a reason and he's got multi-disciplines that he's very high-level at," Bhullar said afterwards.

Bhullar said his phone "went bananas" after the fight aired.

"I knew it was going to be life-changing, so I'm excited for that," he said.

On Saturday, a drive-by parade is scheduled at the Richmond Sikh Temple, with Bhullar showing his championship belt to fans.

After going unbeaten in his first six pro bouts on local circuits — four in B.C.'s Battlefield Fight League and two in Alberta's Hard Knocks Fighting Championship — Bhullar made his UFC debut at UFC 215 in September 2017.

Five months after beating Adams, he won his One Championship debut by decision over Italy's Mauro (The Hammer) Cerilli in October 2019 in Tokyo. That led to the title shot against Vera, a veteran of 16 bouts in the UFC (8-7-0 with one no contest).

Vera switched to One Championship in 2014, becoming the organization's inaugural heavyweight champion a year later by knocking out Taiwan's Paul (Typhoon) Cheng in 26 seconds.

Vera defended the heavyweight title twice, stopping Japan's Hideki Sekine and Cerilli in a combined four minutes 15 seconds, before a failed bid to wrest the light-heavyweight belt from Myanmar's Aung La (The Burmese Python) N Sang in October 2019. His loss to Bhullar followed.

Bhullar's father wrestled in his native India and, happy to have something familiar in a new country, kept at it after coming to Canada. He built a gym at their farm outside Vancouver.

"I started off in diapers on the wrestling mats," said Bhullar.

Bhullar has not left wrestling behind. His family has long run a wrestling club out of its farm.

This report by The Canadian Press was first published May 21, 2021