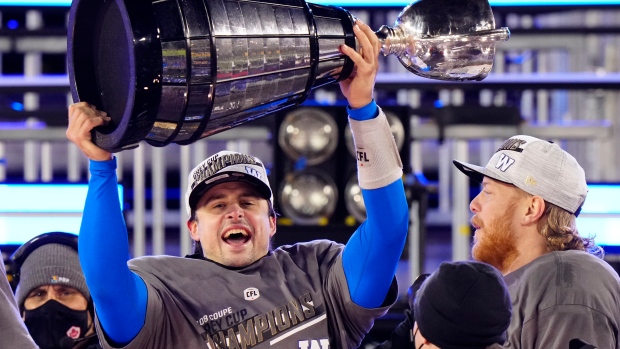 TORONTO — A full slate of games and the return of a pre-season highlight the Canadian Football League schedule for 2022.

The CFL released its schedule on Thursday, four days after the league ended a triumphant but challenging season that followed a year off due to COVID-19.

"2021 was our comeback season and our fans welcomed back our great game with energy, excitement and enthusiasm," CFL commissioner Randy Ambrosie said in a release. "Our players and teams answered with action and entertainment, and we couldn't be more thrilled to begin the journey to Saskatchewan for the 109th Grey Cup on Sunday, November 20."

The Winnipeg Blue Bombers were crowned back-to-back champions on Sunday, edging the Tiger-Cats 33-25 in overtime in the 108th Grey Cup in Hamilton.

That game capped a shortened 14-game season that saw no exhibition games to kick it off.

The 2022 pre-season will give fans a sneak peek with nine games.

The opening week of the regular season has the Montreal Alouettes visiting Calgary on June 9 as Thursday Night Football officials kicks off the season. The Blue Bombers host the Ottawa Redblacks to begin their title defence.

The reigning East Division champion Tiger-Cats kick off their season against visiting Saskatchewan, and the Edmonton Elks face the BC Lions to wrap up Week 1 action.

The season features Saturday games in 20 of the 21 weeks, with 17 evening kickoff times.

The CFL will honour Canada's 155th birthday with a Canada Day matchup between the Elks and Tiger-Cats at Tim Hortons Field, while the Labour Day Classics return with familiar foes taking the field. Winnipeg hosts Saskatchewan in a Sunday night game, before the Toronto Argonauts play in Hamilton and the Elks head to Calgary for the traditional Labour Day Monday games.

The playoffs get underway with the semifinals on the first weekend of November, before the Division winners are crowned the following weekend. The 109th Grey Cup will kick off at 6 p.m. ET at Mosaic Stadium in Saskatchewan on Nov. 20.

This report by The Canadian Press was first published Dec. 16, 2021.

Note to readers: This is a corrected version of an earlier story. The 2022 CFL season will begin on June 9 when Montreal visits Calgary, not June 16 as previously stated.