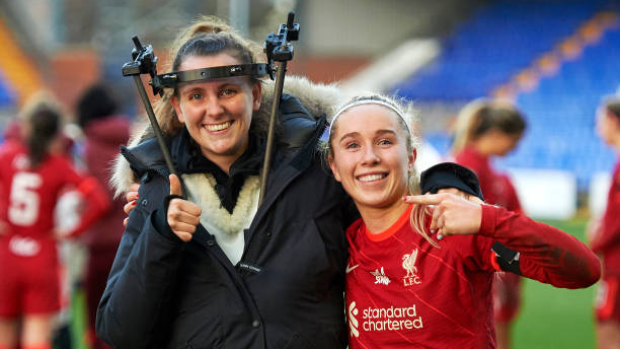 Rylee Foster remembers flashes of the accident in Finland. She was a passenger in the backseat and recalls the beginning – the car losing control and beginning to roll.

She doesn’t remember going through the front windshield.

Foster, a Canadian goalkeeper who plays for Liverpool FC, suffered extensive injuries from that accident last October, including fractures to vertebrae in her neck. But it could have been much worse.

“I was told that my injury should have made me a tetraplegic – basically not being able to breathe or talk on my own,” she told TSN last month. “I'll be quite honest with you, the reality of me actually being able to walk, breathe, talk on my own was significantly amazing. So, very fortunate for that.”

Foster, 23, is on the road to recovery and is currently outfitted with a halo device to restrict movement in her neck and help stabilize her fractures.

She received some positive news earlier this week after her latest scans. Her bones have fused together, and she is expected to have the halo removed in four weeks, without needing surgery. After that, she will be in a hard neck brace for a few more weeks before she can begin rehab.

Her medical team is hopeful that she can make a full return to playing soccer in about a year.

“My body has responded so well to everything, considering the injuries I had,” she said prior to receiving the news about her latest scans. “I had contusions on my lung that looked like I had cancer, basically – that's how badly destroyed they were from the accident. And they were recovered in three days. So, it's one of those things where my body is working. It just might take a little bit longer than expected.”

Despite the positive outlook, it has been an arduous three months for Foster.

“I want to do the sport I love. That's the one thing you identify with, but to have that stripped from you and then be an outsider, it's challenging,” she said.

Last month, she took to TikTok in a series of videos to share her story and to give some insight on her day-to-day life with the halo.

She said she began to use the social media platform partly due to boredom, but also to help anyone who may be in a similar situation.

“I think, for me, it was just about being able to share my experience. I'm not someone that's really good at holding everything in,” she said. “It was also about sharing ways that I've learned that other people may not have been able to adapt as I could. So, I thought, ‘Well, why not share what I can do for the future people, unfortunately, who have to be in this kind of device.’”

Foster, a native of Cambridge, Ont., was visiting friends in Finland last fall when her accident occurred. While travelling to Helsinki, the driver lost control of the vehicle while trying to overtake another car, either due to hydroplaning or icy conditions (officials are still unclear).

The car spun out and began to roll violently in multiple directions. Foster, who was in the middle backseat, ended up being ejected from the vehicle after her seatbelt somehow became unfastened.

According to paramedics, Foster was alert at the scene. They found her sitting upright in a field. She was responsive and talking to the first responders.

She was eventually transported to a hospital in Helsinki to be treated for her injuries, which were extensive:

Fractures to the L4 and L5 regions in her spine. Subdural hematoma in the back of her head. A cheek fracture. Damage to her knee, quad, and femur.

But the most pressing concern was the injury to her C1 and C2 vertebrae, which are located at the base of the skull. Foster suffered a burst fracture, with her C1 in four pieces and her C2 in three.

“What a burst fracture usually means is that there's been a force applied down on the spine,” Dr. Michael Cusimano, a neurosurgeon at St. Michael’s Hospital in Toronto, told TSN. “So, the spine gets spread out so it's like the bone bursts into a bunch of fragments.”

For Foster, the fracture directed outwards, which put pressure on her arteries. While this created problems in terms of restricting blood flow, it may have also been a blessing in disguise.

“If the bone goes inward toward the spinal cord, it will compress the spinal cord and lead to paralysis,” said Dr. Cusimano. “But if it goes outward, that space [the spinal canal] actually gets bigger. It bursts widely open, and I think that's what saved her.

“She's extremely lucky to be alive.”

After approximately a week, the pressure on Foster’s arteries subsided enough to allow her to fly back to Liverpool. She left Finland believing that her fractures were stable, and she would need to wear a hard collar neck brace for around three months.

But a phone call on Oct. 27 changed that.

While having breakfast with her family, her team of specialists in Liverpool, who had reviewed her scans from Finland, contacted her. They told her she needed to get to the hospital immediately.

She then learned that her fractures were completely unstable. One wrong move – a sneeze or cough – and she could risk paralyzing herself.

Not only that, but the weight of her head was causing her C1 fracture to expand. She needed to be put in the halo to immobilize her neck and alleviate the weight.

“The halo just basically restricts the movement of your neck,” Dr. Cusimano explained. “So, it's actually good at this level. Because if the bones heal, and then the ligament heals, she should still have good movement at the neck eventually – if she does a lot of physiotherapy and things.”

Part of Foster’s TikTok series is detailing her daily life with the halo: how she sleeps, how she changes clothes, how she washes her hair. Her sister, Mackie, has moved to Liverpool to help Rylee.

Foster has done her best to adapt but admits that it’s been difficult. She is severely limited in what she can do, which has led to a lot of Netflix and a lot of sleep.

“I've been really enjoying my sleep. I think sleep is probably the best thing for me lately and I think it might be a way to kind of cope with the reality – the longer I sleep, the less of the day I have to deal with,” she laughed.

In terms of her day-to-day pain, Foster feels the worst is behind her.

“I'd say from the beginning, what I’m experiencing now is nothing,” she said. “From day one – that was unbearable. Now it's just discomfort. It's just awkward positioning. I get some aches, a lot of muscle spasms, surprisingly. It's just because my neck is stuck in a position from the accident.”

Foster, who signed with Liverpool FC in Jan. 2020 after her collegiate career with West Virginia, has tried to visit the team’s training grounds at least once a week and says the support from the club has been amazing.

“Anyone could say, from their experience in the women's game, that you can be written off in a second, even with an injury that happens in a game or at a training centre. They could write you off and just say, ‘No, it's not worth our time.’ But Liverpool committed to me, and they showed how much they cared. They've provided everything I need,” she said.

Foster has yet to earn a cap with the senior Canadian national team but was part of several camps leading into last year’s Olympics. She said she has heard from several members of the squad and feels fortunate to have the support.

While Foster is grateful to have her Liverpool teammates be with her on this journey, she admits it’s a complicated situation. She watched the team train for the first time since the accident two weeks ago, an experience she described as emotionally exhausting.

“It's a double-edged sword. I'd be lying to you if I said it's just a complete motivator,” she said. “What I struggled with a lot was when I got hurt, and your teammates come and talk to you – they don't want to talk about the injury. They want to talk about everything that's going on the training grounds. But they're complaining about it. And you're sitting there going, ‘You guys are so lucky to keep playing – in a blink of an eye, it can be taken from you.’”

Despite the positive outlook of having the halo removed in four weeks, it’s still a long road back to the pitch for Foster, and it’s unclear when she will be able to return to any kind of training.

“She would work with a lot with physiotherapists at first to try to regain her neck range of motion. She's probably deconditioned dramatically,” Dr. Cusimano said. “And she would have to recondition, rebuild up stamina and muscle strength and neck muscle strength as well. So, the therapist would work with her every day on that sort of thing. To regain the high level that she's at is going to take itself a long time.”

Foster is focused on taking it day by day, TikTok by TikTok.

“I'm hopeful that this time next year, I could be on the pitch again, fully back to normal,” she said. “I don't know… but anything can happen. And so far, miracles have happened.”