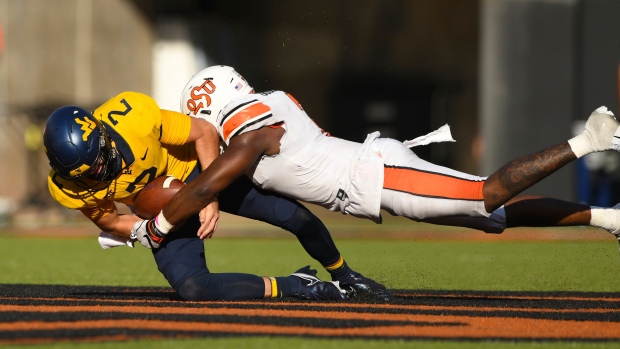 The other Canadian starter on Oklahoma State University's football squad is off to solid start.

Chuba Hubbard, a running back from Sherwood Park, Alta., garnered plenty of headlines at OSU last year after rushing for 2,094 yards and 21 TDs. But linebacker Amen Ogbongbemiga of Calgary enjoyed a stellar '19 campaign with a team-high 100 tackles to secure second-team All-Big-12 honours.

OSU's top defensive player last year already has 17 tackles. That leaves the 22-year-old redshirt senior tied for the team lead with the No. 17-ranked Cowboys (2-0) preparing to visit Kansas (0-2) this weekend.

"Consistency is key," Ogbongbemiga told reporters Thursday during a videoconference. "A lot of dudes are one-hit wonders and I've never let that get into my head.

"I have to keep building, to keep improving . . . it's always been on my mind to just keep working hard and keep improving to take my game to the next level. I don't want to get complacent as a defence because a lot of noise is getting pumped into our heads but we've got to ignore it and move on."

There's plenty of eyes on Hubbard this season. And while the junior has rushed for 207 yards and two touchdowns on 49 carries, his four-yard average per carry is down from last year's lofty 6.4-yard mark.

"He probably feels he's trying to do too much and trying to make plays he doesn't necessarily have to make," Ogbongbemiga said. "He had a great week of practice this week . . . I think he's going to take the next step, whether it's this week or the game after.

It remains improbable to see two Canadians — hailing from the same province, no less — playing such dominant roles with a major American university. It's a point not lost on Ogbongbemiga — whose full name is pronounced AY-men awg-BONG-beg-MEE-guh.

"We kind of carry the same values: Hard work; consistency; and trying to achieve greatness," he said. "We want to do things to change the narrative of Canadian players and hopefully we've done that but we still have something to prove throughout the course of the year.

"We just want to prove football is football no matter where you're at. If you see talent, don't be afraid to pull that trigger and go for that kid because hopefully that can change your program."

The six-foot-one, 235-pound Ogbongbemiga made headlines in June when tested positive for the novel coronavirus after attending a rally in Oklahoma protesting racial injustice and police brutality. Although the accounting major has made a full recovery, he admits it did take away somewhat from his pre-season preparation.

"I still did my extra work . . . but when you're not practising as much as usual you can't get into that game-shape that you want to be in. Now it's kind of got to normal, our team has done a good job handling this."

And despite the positive test, Ogbongbemiga said he's had no apprehensions returning to the field.

Later in June, Hubbard spoke out publicly against Cowboys head coach Mike Gundy after a photo surfaced of Gundy wearing a T-shirt of a far-right news network. Gundy apologized and the two made amends but Ogbongbemiga said the social justice issues galvanized the entire team.

"It made OSU a better place," he said. 'We have a team full of seniors and old veteran guys and all that stuff just brought us closer.

"It got us to know each other better, it kind of broke barriers that were there before. Everything is going to come together and we can be the strongest team that I've seen since I've been here."

Ogbongbemiga took a long path to Calgary. He was originally born in Lagos, Nigeria and his family spent eight years in Houston before moving to Calgary in 2011 and eventually becoming Canadian citizens.

His older brother, Alex, played at Houston and the University of Calgary and spent time in the CFL as a fullback with Saskatchewan, Edmonton and B.C.

"Everything happens for a reason and I don't regret (moving to Calgary) ," Ogbongbemiga said. "I've met some great people and I'm part of a great country.

"Canada is where everybody wants to be right now and I'm lucky to be able to go whenever I need to. I'm thankful for the opportunity.."

Ogbongbemiga's focus remains helping OSU continue to excel within the Big 12 this season. But he's also eligible for both the CFL and NFL drafts next year and admits a pro career south of the border has long been on his radar.

"That's definitely the goal," he said. "I want to be at the highest level I can possibly be.

"I've always reached for the highest, I don't like settling."

This report by The Canadian Press was first published October 1, 2020