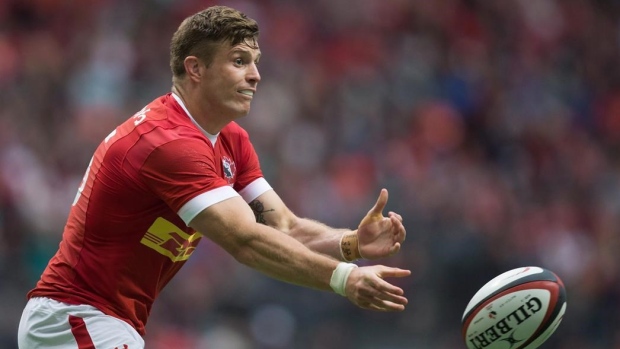 The 32-year-old Evans won 40 caps for Canada, was part of both the 2011 and 2015 Rugby World Cups and also played for Canada's sevens team. A graceful runner with pace, the versatile Evans played for Canada in every position in the backs other than scrum half.

He scored a memorable try from fullback against Italy in the 2015 Rugby World Cup, leaving would-be tacklers in his wake and slashing through the defence at Elland Road in Leeds, England.

Born in England to an English father and Welsh mother, Evans moved to Vancouver Island when he was 11. He won his first cap for Canada against Ireland in 2008 and last appeared against Germany at the World Cup repechage in France in November 2018.

He missed most of 2017 with a serious knee injury that required two operations.

Evans joined the second-tier Pirates after the 2011 World Cup and went on to score 63 tries in 130 appearances. Prior to the Pirates, Evans was with the Newport Gwent Dragons.

"Obviously it hasn't quite hit me yet that I have retired from playing," he told the Pirates website. "However, I can say that I have thoroughly enjoyed my time on the field and will look forward to reminiscing in the future."

Away from rugby, Evans is a part-time firefighter.

Canada coach Kingsley Jones, a former Wales captain, says Evans had been on his radar since he was 17. Jones admits to having had his eye on Evans as a possible Wales recruit but was glad to have him in Canadian colours at the last-chance World Cup qualifier in 2018.

"His input and his performances in the repechage were absolutely invaluable and appreciated by everybody," said Jones. "One of the best players I've worked with in terms of his maturity, his selflessness. And a proper team man, that's the biggest thing I can say about Matt."

Evans is also a close friend of Jones' son.