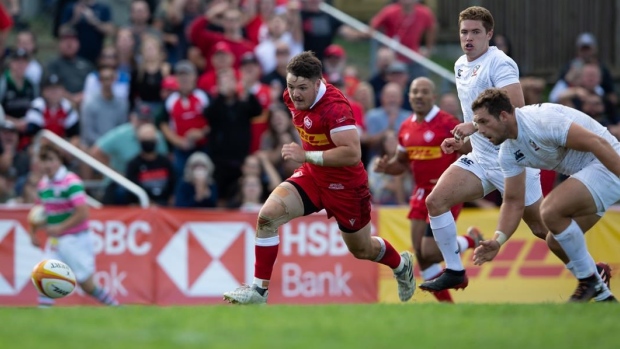 Spencer Jones' road to the Canadian rugby team took him to New Zealand, Europe, Texas and then Victoria.

The 24-year-old Jones will start at fly half Saturday when 23rd-ranked Canada takes on No. 19 Portugal in Lisbon. It's the first outing for the Canadian men since they failed to qualify for the Rugby World Cup, losing series against the 17th-ranked U.S. and No. 26 Chile.

The Portugal game will mark Jones' fifth cap for Canada. He was slated to be part of Canada's July tour, which saw Canada beaten by England and Wales, but was injured playing for the Toronto Arrows just prior to departure.

It will also be his first Canadian game at fly half after four outings at centre. Coach Kingsley Jones opted to shift Peter Nelson, who played No. 10 in the four World Cup qualifiers, to fullback only to see the France-based player drop out due to injury. Rob Povey instead will start at No. 15.

Born in Vancouver to a Canadian mother and Kiwi father, Spencer Jones was 13 when his family moved to New Zealand where his rugby education got a boost. He played for the Hamilton Old Boys and was part of the Waikato Development squad.

Chance played a role after that.

After a year and a half at the University of Waikato, a 21-year-old Jones was backpacking in Europe when he ran into someone at a hostel who suggested he play for a club team in Austin. That led to a stay in Texas before rugby took him to Victoria. He was noticed by the Arrows, who brought him on board for their inaugural 2019 season.

Jones, who re-signed with the Major League Rugby club this week, played in all 16 games in 2019 but was unable to take part in the pandemic-shortened 2020 campaign due to injury. He played in nine matches this season.

The six-foot-one 220-pounder has accumulated 1,024 carry metres on 126 carries for three tries in his time with the MLR side.

Jones has found a new home in Toronto with the Arrows

"Everyone's kind of been together since 2019 so we've built (a) really good culture," he said. "We're just building every year so it's pretty exciting."

He also likes the bustle of Toronto, a change from his more rural New Zealand home of Cambridge.

"Coming out to Toronto and living in the big city is a little bit of a different lifestyle but I don't mind it. There's a lot of beautiful surrounding parts as well, so it's good."

His mother's relatives are in Alberta with his father's family all back in New Zealand. Jones has not been back to New Zealand since the pandemic but has an airline ticket booked for later this month.

"I get to go home for a month, which is super-great," said Jones. "I haven't seen family for a long time."

"I ended up tearing my meniscus as well. Not really knowing fully what it was, I just kept playing on it And then, come the start of the 2020 season, it just got to a point where I was not able to run and anything. So that's when we decided to have a couple of surgeries on it.

The hiatus from the pandemic meant he did not miss that many games in 2020. But he says the layoff was still "super-hard."

This season, he tore an ankle ligament, causing him to miss out on Canada's tour. "Pretty gut-wrenching news to hear," he said.

Jones is one of eight Arrows in Canada's starting 15 Saturday, including captain Lucas Rumball. There are two more on the bench.

Thirteen of the starters ply their trade in MLR.

Canada has won all four previous matches with Portugal, romping to a 52-8 victory in Lisbon in 2013 in their last meeting. But Kingsley Jones warns this Portuguese side will be a handful.

“Portugal look like favourites to finish as the team that goes to the World Cup from the European Nations Cup, so it’s a big challenge,” Jones said in a statement. “I want to see our players continue their learning, particularly defensively. That is an area we need to get better at.

"There are lots of good things. Our set pieces have been excellent. I want to see that continue to grow and I want to see players excited to play and bounce back from a disappointing result last time out.”

Portugal is coming off a 49-26 victory over No. 22 Russia in July, having dispatched No. 20 Spain and the 24th-ranked Netherlands earlier this year, also in World Cup qualifying.

"There are a lot of the sevens boys on that team so they're going to be fast and hard-runners," said Spencer Jones. "We're expecting a big offload game from them, so we'll just try to shut them down early and put a lot of pressure on them. Hopefully they don't expect what's coming."

Isaac Olson, from the Canadian sevens squad, could earn his first Canadian cap off the bench.

''I sat there and just kind of had a moment, and looked at the crest and thought about all the hard grinding years that you've had, running outside with your dad. My old man used to chase me in a car and make me run … And then putting the jersey on for the first time and running out, especially in front of a St. John's crowd that was super-loud and right behind you, was a pretty special feeling, for sure."

For Canada, which plays No. 28 Belgium on Nov. 13 in Brussels, the November tour represents a new beginning after the failed World Cup qualifying campaign that will see the Canadian men miss the sport's showcase for the first time.

"The mood in Chile was pretty low after we lost, as expected," said Jones. "But coming into Portugal, I think the boys now are playing with a bit more freedom. Everyone right now is actually super-exited … We've got quite a young team so I think it's a time for us to all get together and really put our best foot forward to the next six years (leading to the 2027 World Cup)."

Jones, who says competition in the squad is fierce, is a fan of his namesake coach, Kingsley Jones.

"He pushes you and he's really good at finding a lot of the small stuff that you don't probably see too much on the videotape. He's a good man, he's a good coach and he's really pushing us and motivating us to be better every single day''

This report by The Canadian Press was first published Nov. 4, 2021