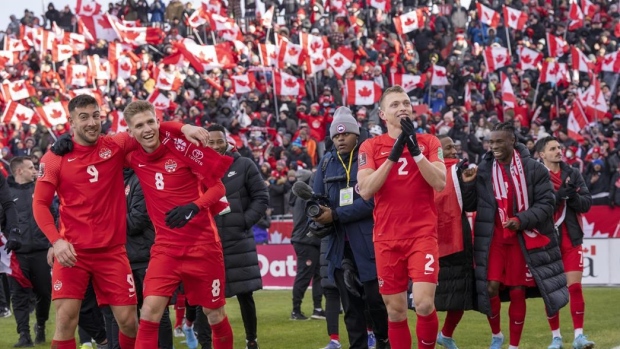 Canada's World Cup credentials will be put to the test this November in Qatar against Belgium, Croatia and Morocco in Group F.

While there were perhaps tougher destinations — Spain and Germany were drawn in Group E — it is a challenging group for the 38th-ranked Canadian men.

Belgium, which spent more than three years atop the FIFA rankings, is currently ranked second in the world while Croatia is No. 16 and Morocco No. 24. Only the top two teams in the group will advance to the round of 16 at the 32-country tournament.

Canada coach John Herdman was unfazed with a smile as wide as the support behind his team.

"Brilliant," Herdman said of the group. "We wanted those type of games. You're going to a World Cup. There's no easy matches. And I think any team can beat any team in a given day. That's just tournament football."

Canada was the last name called out in Friday's draw for the tournament, which runs Nov. 21 through Dec. 18. Herdman called it a "surreal moment" after the Canadian men's 36-year absence from soccer's showcase.

"To have our team pulled out (out of a pot in the draw) and just to see that this is real. Canada's on the big stage now," he said. "We're not just heading to Qatar. We're ready to play in Qatar, where we know the teams we've got. We've got a wonderful opportunity ahead of us.

"Everything that came out of that draw was just opportunity for this county. The players — personally, professionally — the team collectively and as a country. What an opportunity."

Canada will open Nov. 23 against Belgium before facing Croatia on Nov. 27 and Morocco on Dec. 1.

The teams that come out of Group F will play one of the top two teams in Group E, which could mean a date with former champions Spain or Germany in the round of 16.

Herdman, whose team topped the final round of CONCACAF qualifying at 8-2-4, watched the draw from a TV studio in Toronto. The timeline was too tight to get to Doha from Panama City, where the Canadians wrapped up qualifying in a 1-0 loss Wednesday.

Croatia and Belgium finished second and third, respectively at the 2018 World Cup in Russia. Morocco went unbeaten in African qualifying (7-0-1), outscoring the opposition 25-3.

Star-studded Belgium moved into top spot in the FIFA world rankings in September 2018 and stayed there until this week, when it was leapfrogged by Brazil. The Red Devils lost 1-0 to eventual champion France in the semifinals of the 2018 World Cup before dispatching England 2-0 in the third-place game.

The Belgians won their World Cup qualifying group this time with a 6-0-2 record against Wales, the Czech Republic, Estonia and Belarus.

Croatia was runner-up to France in 2018. This time around it won Group H in European qualifying with a 7-1-2 record, finishing ahead of Russia, Slovakia, Slovenia, Cyprus and Malta while outscoring the opposition 21-4.

Morocco secured its World Cup berth with a 5-2 aggregate win over the Democratic Republic of Congo after going 6-0-0 in its initial group.

"This is what we want," said Herdman. "We want that underdog story. We'll be at our best when we rely on our grit, our spirit and then to bring that no fear (attitude), that opportunity that exists in those type of games against the best players in the world.

"People like Alistair Johnston, Kamal Miller, Jonathan Osorio, local Canadian boys get a chance to match themselves but tell a story in those games. So for us, there'll be a no fear mentality. Not naive, but no fear coming into this. Just see the opportunities to pioneer for this country and get after scoring that first goal for Canada at a (men's) World Cup."

The Canadian men have never faced Croatia. Canada and Belgium have played once before, with the Belgians winning 2-0 in Ottawa in June 1989. Canada is winless in three meetings with Morocco (0-2-1) with the most recent meeting a 4-0 loss in Marrakech in October 2016 under interim coach Michael Findlay.

Goalkeeper Milan Borjan and midfielders Samuel Piette and Osorio, members of the current Canadian squad, all started in that game against Morocco.

"As footballers we want to challenge ourselves against the best and we have that opportunity here," said Osorio.

While Canada will be playing CONCACAF Nations League matches in June, Herdman said there will be an opportunity to play a friendly game in Canada at the beginning of the international window. He said he will look to take the team to Europe in the fall to play more matches to prepare for Qatar.

The Canadian men have played just two non-CONCACAF teams since Herdman took over in January 2018 — a 1-0 loss to Iceland in January 2020 and a 1-0 win over New Zealand in March 2018 in Herdman's first game at the helm.

Herdman's record with the Canadian men is 29-8-4 with the only losses to the U.S. (twice), Mexico (twice), Haiti, Iceland, Costa Rica and Panama.

The Canadians drew France, Hungary and the Soviet Union as first-round opponents in their only other visit to soccer's showcase — Mexico '86. Canada lost all three matches and was outscored 5-0.

Friday's draw had Canada in Pot 4, which featured the lowest-ranked qualified teams. Rules of the draw meant that the Canadians could not be put in a group with fellow CONCACAF qualifiers Mexico and the U.S.

Hopes were raised when the U.S. and Mexico went into Groups B and C respectively, leaving Group A open for a CONCACAF team with host Qatar, at No. 51 the lowest-ranked seed in Pot 1. Ecuador, the second team out of Pot 4, eventually landed in Group A.

The winner of intercontinental playoff 1 — either the United Arab Emirates/Australia or Peru — was drawn in Group A but had to move to Group D to stay away from fellow confederation teams. That meant Canada would not face France, Denmark and Tunisia.

The winner of the intercontinental playoff 2 — either Costa Rica or New Zealand — was drawn in Group B but had to move because the U.S. was already there. That sent the playoff 2 winner to Group E, alongside Span, Germany and Japan.

The intercontinental playoffs are slated for June.

Cameroon was drawn in Group F but was moved to Group G to avoid fellow African side Morocco. That meant Canada avoided Brazil, Serbia and Switzerland.

Ghana was the penultimate country picked, initially to Group F but it too had to be moved because of Morocco's presence. So the Black Stars were moved to Group H alongside Portugal, South Korea and Uruguay

That left Bora Milutinovic, who took five countries to the World Cup as manager, to pluck the final ball containing Canada's name — and with just one destination — Group F.