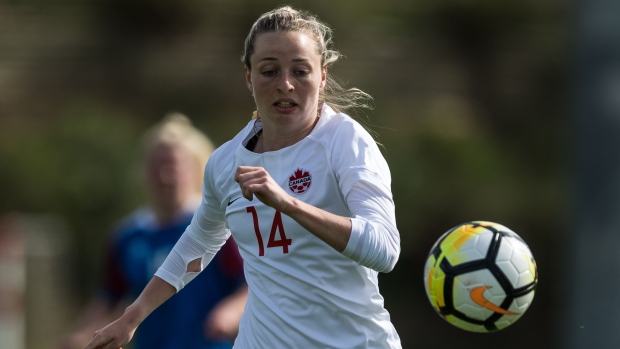 Gabrielle Carle is another key member of Canada’s younger generation who is entering her first senior-level Women’s World Cup. She has captained the Canadian Under-20 squad, and last year she won the NCAA championship with Florida State.

Carle was 14 years old when she was invited to Canada’s Under-17 camp in 2013. The next year, she represented her country at the 2014 FIFA U-20 Women’s World Cup, playing in all four of Canada’s games. In 2015, Carle was named to the roster for the Pan American Games, where she featured in all five games for her country.

She made her senior team debut on Dec. 9, 2015, earning the start against Mexico. Two months later, she scored her first international goal against Guatemala during Olympic qualifiers. That same year, she played every minute for Canada at the 2016 FIFA U-20 Women’s World Cup, scoring the lone goal against Nigeria. She was also named as a reserve for Canada at the Rio Olympics, taking home a bronze medal.

In 2018, Carle was Canada’s captain at the CONCACAF U-20 Women’s Championship.  She scored twice during the group stage, and also netted the lone Canadian goal against Mexico in the semi-finals, which Canada would lose in penalties. After the match, Carle guaranteed that Canada would still qualify for the U-20 Women’s World Cup, needing a win against Haiti in the third-place game to do so. Despite Carle being named Player of the Match, Canada was upset by Haiti 1-0 and missed qualifying for the U-20 World Cup.

Carle has played at Florida State University since 2017. In her freshman year, she started in all 21 matches for the Seminoles. The following season, playing as a defender, she helped lead Florida State to the NCAA title, scoring her lone goal of the season in the semi-final against top-ranked Stanford. Carle was named to the College Cup All-Tournament team, and she also earned the 2018 NCAA Women’s Soccer 90 Award, given to the player at the College Cup with the highest cumulative GPA.

Carle has shown versatility in her young career, playing as both a midfielder and forward over the years with Canada, while featuring mainly as a defender for Florida State. Like many of her teammates, she is hard-working and tenacious on the field, and has shown strong technical skills.