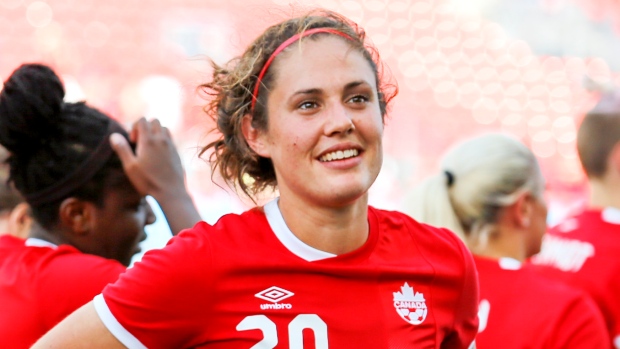 Woeller has had a unique journey to the Canadian roster. After making 16 appearances for Canada from 2009 to 2012, she didn’t appear with the national team until 2017.

Woeller began her journey within the Canadian system at Under-15 camp in 2005.  Three years later, she was named to the squad for the 2008 FIFA U-20 Women’s World Cup, but she didn’t play in any games.

One year later, she was invited to her first senior camp by then-head coach Carolina Morace, making her debut at the age of 19 as a substitute on Mar. 7, 2009 against the Netherlands.

In 2010, Woeller played every minute for Canada at the CONCACAF Women’s Under-20 Championship, but the team failed to qualify for the U-20 Women’s World Cup after losing to Costa Rica in the third-place game.

Woeller made two more appearances for the senior team in 2010, and while she was invited to several camps in 2011, she was not named to the World Cup roster for that year.

John Herdman took over as coach following the 2011 Women’s World Cup, and named Woeller to the squad for the Pan American Games.  Woeller played every minute for her country and helped Canada earn gold.

A few months later, Woeller was once again a key player for the Canadians during Olympic qualifying, playing all 90 minutes in each of Canada’s five games. However, Woeller was not named to the Olympic roster for that summer and the invites to camp soon dried up.

Woeller turned her focus to her club soccer. After spending time with the Vancouver Whitecaps and Seattle Sounders, Woeller made the transition to Europe. Over the years she has played in leagues in Norway, Iceland, Germany and Sweden, where she currently plays for Eskilstuna United DFF.

Woeller received a surprise invite from Herdman back to Canadian national team in 2017 when the squad was in Germany, where she was playing at the time. On Apr. 9, 2017, she made her first appearance for Canada in over five years. She has been a regular call-up ever since.

As the injuries might suggest, Woeller is a body-on-the-line kind of defender. She offers experience and depth at centre back behind Kadeisha Buchanan, Shelina Zadorsky and Rebecca Quinn.